We will not participate in talks that dispute our sovereignty, President stresses 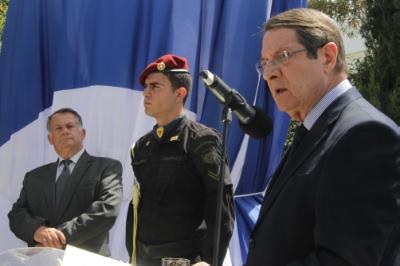 No one should expect the Greek Cypriot side to participate in talks for a solution which dispute the sovereignty of the Republic of Cyprus, President Nicos Anastasiades stressed on Sunday.

“Our will, desire and resolve for a solution to the Cyprus problem is given but no one should expect our participation in a process which is essentially disputing the Republic`s sovereignty,” Anastasiades said addressing a ceremony to unveil a statue for Gregoris Afxentiou, a hero of the 1955 – 1959 anti-colonial struggle.

The President`s comments come in the wake of expectations that the stalled UN-led peace talks are set to resume in April or early May. UN top envoy on Cyprus, Espen Barth Eide, in an interview with “Kathemerini” appeared optimistic that talks could begin in Spring. Anastasiades suspended his participation in the peace talks following a Navigational Telex or NAVTEX, issued by Turkey in October last year, as Turkish seismic research vessel “Barbaros” violated the Republic’s exclusive economic zone.

In his address, the President referred to the Cyprus problem, noting that the current status quo, 41 years since the 1974 Turkish invasion that resulted in the occupation of 37% of Cyprus` territory, is “dangerous.”

“It is our obligation but also a national and natural need to put an end to this dangerous state of affairs as soon as possible,” he pointed out, adding that “we have an historic responsibility to restore this anomaly caused by the 1974 invasion and the continuing occupation.”

As he said, “through collective effort we should work to find at long last a final solution which will rid our country of Turkey`s occupation, reunite the island and restore human rights and fundamental freedoms of the entire people and, of course, secure the refugees` right to return (to their homes)”.

This goal, this vision is the highest honour towards those who have sacrificed their life in the course of their duty, he added.

Anastasiades noted however that this objective does no depend on Cyprus, its people or its political leadership.

“Unfortunately and despite our efforts, despite our good will, despite the fact that we have tried through a set of confidence building measures to create the appropriate conditions and strengthen the required momentum for the dialogue, the Turkish side`s negative stance in the past two years has not allowed a fruitful negotiation to take place,” he said.