US President’s bimonthly report on Cyprus 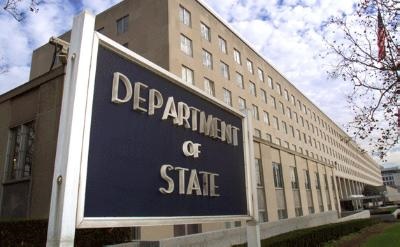 The United States remains committed to finding a just and lasting settlement, that will reunite Cyprus in a bizonal bicommunal federation, notes the bimonthly report of US President Barack Obama on Cyprus.

The report, which is being drafted by the State Department, is accompanied by a cover letter of Julia Friefield, the US Assistant Secretary of State for Legislative Affairs, to the Chairman of the Committee on Foreign Affairs of the US Senate, who notes that the efforts for a comprehensive settlement continued, despite the fact that during the given period (December 2014-January 2015), negotiations facilitated by the UN were suspended.

It further stresses that during the two months of the report “the US continued to express public support for the right of the Republic of Cyprus to develop hydrocarbon resources in its Exclusive Economic Zone and for any potential revenue from the energy resources to be shared equitably between both communities within the context of an overall settlement”.

Among others, the report takes stock of the UN Secretary General good services mission, as well as the various contacts by Espen Barth Eide, the UN SG Special Adviser for Cyprus.

On the role of the US, the report says that they continued their involvement on a higher level, supporting efforts for the resumption of negotiations, while the US Embassy in Nicosia continued to support programs to foster cooperation and understanding between the two communities in support of a settlement.

The report recalls that Vice President Joe Biden and Assistant Secretary for Europe Victoria Nuland visited President Anastasiades in New York in December who was there for medical treatment, while Deputy Assistant Secretary Amanda Sloat engaged Greek Cypriot and Turkish Cypriot stakeholders during a January visit to the island. In addition, it says that Secretary Kerry met with President Anastasiades on the margins of the World Economic Forum in Davos in January.

It also says that civil society took concrete steps to support the settlement process and that political parties, trade unions, business associations and civil society form both communities approved in January a charter to establish the Cyprus Dialogue Forum, which aims to develop options and suggestions for the negotiation process, consult with and prepare the public for a solution, and promote a shared vision and culture of coexistence for the future.

The leaders of the Greek Cypriot and the Turkish Cypriot communities will resume talks for the reunification of Cyprus on Friday May 15th, as the Special Advisor of the UN Secretary General for Cyprus Espen Barth Eide announced on Monday.