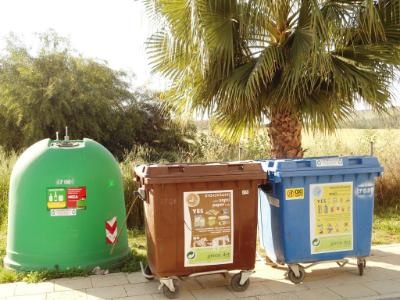 The University of Cyprus is very close to fulfilling its goal for zero garbage since a large quantity of its waste is already being recycled. Soon, the University of Cyprus will be implementing a recycle system to be used on a trial basis. At the same time, a reward scheme for students who recycle paper will be launched (ReCyWard-recycle with awards).

One of the greatest successes for the University of Cyprus is the operation of the photovoltaic park “Phaethon“ of total power of 395kW which is estimated to contribute 632,000 kWh of green energy per year. Soon the construction of research park “Apollon“ is going to start which will make the UCY energy autonomous.

Rector of UCY, Head of Green University Committee Constantinos Christofides has told the Cyprus News Agency that the University has adopted a series of measures to promote environmental awareness and sustainability. Its environmental policy `s main pillars is to have a balance between economic, social and environmental parameters.

He said that UCY`s vision is to reduce the effects of the University`s operation on the environment and has set main goals for the reduction of the use of energy and water, the implementation of the policy for green public procurement, the management of fluid and solid waste and the reduction of carbon emission.

Green University Committee aims at turning UCY into a green education institution. The University is already a member of UNICA (Network of Universities from the Capitals of Europe) and through UGAF (Unica Green Academic Footprint) has developed a series of environmental activities.

The Rector has told CNA that prior to the construction and further development of the various premises and infrastructure, the University has conducted studies and surveys on the environmental effects and how to minimize them, which include planting of 2.500 trees and plants in the areas that surround the University and its campus and the creation of a forest area which includes Cyprus flora.

The water irrigation of the plantation of more than 22.000 square meter is done with recycled water which undergoes third degree processing.

With the operation of the photovoltaic park “Phaethon“ and the scheduled construction of the “Apollo“ Park, the University Campus will become energy self sufficient.

According to the Rector, “Phaethon“ Park was constructed with EU funding and will contribute a total of 632.000 kWh of green energy per year.

Christofides told CNA that in 2015 the construction of “Apollo“ Park will begin and is set to become a model for such developments worldwide as it will implement new technologies and practices.

“Apollo“ Park includes the construction of photovoltaic panels which will generate energy of 10MW. The Rector told CNA that the energy will be able to cover the needs of the current buildings and premises of the University and when this is fully developed to include 10.000 students, the needs are going to be met with the use of other renewable sources.

According to the Rector, the University will soon run, on a trial basis, a recycle system which will be launched at the beginning at the building of the Senate, the Social Center and the Kindergarten and Nursery School.

Soon a scheme called ReCyWard (recycle with awards) will be launched and will reward all the students who recycle paper. The study and execution of this scheme will be done solely by students. Furthermore the University will be implementing a battery recycle program soon and is also planning to set up a solar center for water deposit and a desalination center.

The Rector has told CNA that the staff and students are very much involved in all these projects and encourage all the activities which aim to raise awareness. He also said that the level of cooperation with the central government, the local authorities and other institutions and organizations is very good, however there is always room for improvement.

Replying to a question, the Rector said that because of Cyprus` small size, there cannot be large quantities of material that would enable the construction of huge recycle centers. Therefore, he added, many recycled items and hazardous waste are accumulated in temporary storage places waiting to be exported for further processing and recycle.

The Rector noted that education plays a pivotal role to this end, adding that the new generation of students is very much focused on and interested in research issues and the implementation of new technologies which help to maintaining a green and healthy environment.