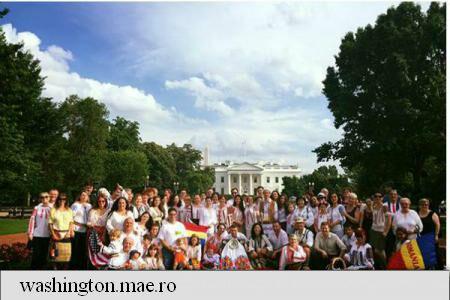 The Universal Day of Romanian Blouse was celebrated on Sunday in the United States by the Romanian Embassy and the local Romanian community. Initiated and coordinated by the La Blouse Roumaine on-line community, the day provided an opportunity to promote a wonderful Romanian tradition and create a country brand that is worldwide renown.

In order to mark the event in Washington DC, a meeting was convened in the White House area that was attended by more than 100 people from the Romanian community, as well as US citizens who love and appreciate the Romanian blouse. The participants also promoted traditional Romanian objects, the Romanian Embassy to the US reported in a press statement on Monday evening.

The Romanian Embassy in Washington, in cooperation with representatives of the Romanian community of Washington proclaimed June 24 the Universal Day of Romanian Blouse in Washington and started off formal demarches to get the proclamation officially accepted.

La Blouse Roumaine is a movement that has evolved around the image and significance of the traditional folk costume “ia,” the Romanian blouse. As well as being things of beauty, these Romanian folk costume items are special, genuine anthropological artefacts that reflect the identity of their bearers through manually sewn symbols. The organisation has generated a series of initiatives to reposition the identity of the “ie” as well as of the traditional Romanian culture overall. On January 21, 2013, La Blouse Roumaine proposed that June 24, 2013, traditionally a day to celebrate Sanzienele, midsummer fairies in Romania, mark the first celebration of the Universal Day of the Romanian Blouse. More…