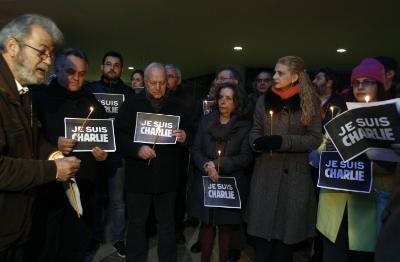 The Union of Cyprus Journalists has organised a rally to protest the terrorist attack against journalists of the French review Charlie Hebdo, expressing solidarity and support for the French media.

“We the journalists in Cyprus, individuals and organised groups, gathered here today, outside the French embassy to condemn the murderous attack against those working for Charlie Hebdo review,” a resolution adopted by the rally said.

The Union of Cyprus Journalists condemns the terrorist attack and raises its voice against any racist act in the name of any religious denomination, ideology or conviction, which is against human life, it added.

“The murderous attack against the employees of the French review is also an attack against freedom of speech and freedom of expression as well as against the democratic principles,” the Union points out, adding that it condemns every policy which promotes, imposes or nurtures terrorism, which “unfortunately have been adopted by specific countries and are the core cause of extreme terrorist acts which various people are faced with today.”

The Union expresses its solidarity and sympathy to French journalists, stressing that media around the world have a duty to act as the vanguard of the fight against every kind of violence.

Participating journalists lit candles outside the French embassy in memory of those killed in the Paris attack. They also conveyed their sincere condolences to the next of kin of the victims.
CNA MM/2015
ENDS, CYPRUS NEWS AGENCY