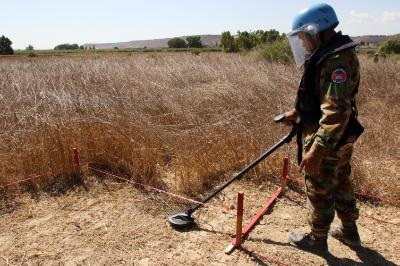 There is real momentum on demining in Cyprus due to the good cooperation from both sides, said on Wednesday UNIFYP Force Commander Major General Kristin Lund, noting however that there is still work to be done.

Lund was speaking to reporters who visited the Mine Hazard Area near Mammari village where a team of Cambodian demining experts has been working since 26 May to clear an affected area of the UN-controlled buffer zone.

The 20-strong team from Cambodia provided technical expertise and equipment as part of UNFICYP’s inter-mission cooperation with the United Nations Interim Force in Lebanon (UNIFIL).

The deployment followed an initial assessment by the United Nations Mine Action Service (UNMAS) in February 2015 and a further survey by experts from UNIFIL in April 2015, which showed that mines were displaced from north of the ceasefire line into this part of the buffer zone by winter floods.

Over the course of their work, said Lund, flanked by Major Mike Holgate, UNFICYP Mine Project Coordinator, the team found and destroyed five (5) Russian anti-personnel mine components and two (2) American made complete anti-tank mines.

Three months on, the team has successfully cleared this area of mines and the area is now safe.

“Clearing this area has been risky and difficult work, conducted in hot, challenging conditions by a professional and dedicated team from a country far away but all too familiar with the devastation that landmines bring to communities”, the UNFICYP commander said.

She said the Cambodian unit has done “an excellent job under difficult conditions” and thanked the UN Mission in Lebanon and UNMAS for their support.

Major Mike Holgate referred to the arduous work of the deminers, from morning until afternoon in the heat, clearing step by step the area affected, cutting brush in small sections so they can use their metal detectors. The deminers are rotated every 30 minutes to maintain concentration.

Lund said that to avoid a mine wash like this one reoccurring in the future at Mammari, UNFICYP has liaised closely with the Turkish Cypriot authorities and secured their commitment to clear the area north of the ceasefire line in the coming months, something that was welcomed by the Secretary General.

The safety of the local community has been the first priority for UNFICYP and the demining team, she underlined, adding that once the area north of the ceasefire line is cleared, “we will not see this area affected by landmines again. This will have a significant positive impact for the local community”.

Regarding the 28 minefields pending, Lund said the UN has welcomed the decision of the Greek Cypriot leader, Nicos Anastasiades, to hand over to the Turkish Cypriot leader, Mustafa Akıncı, information pertaining to the 28 National Guard minefields. This, she said, constituted a very important step towards achieving a mine-free Cyprus and helps build confidence between the sides.

Most of the buffer zone was cleared of mines in 2011. Between 2004 and 2011, when the UN undertook a large-scale project to clear the buffer zone of over 27,000 landmines, the EU contributed 11 million euros, or 80% of the total funding, a move which was described by Lund as extremely generous.

She recalled that UNFICYP is committed to providing all possible assistance to facilitate the clearance of what remains of those 28 minefields.

UNFICYP and UNMAS, said the Force commander, with excellent cooperation from both sides, worked to refine the data provided and map out the minefields, which are suspected of containing both anti-tank and anti-personnel mines.

A survey to assess the scope of the contamination and the requirements for subsequent clearance was completed on 7 July 2015 and the findings, dated 16 July, are being communicated to the sides to determine the way forward. “As we now know, 25 of those 28 areas have proven to pose no mine risk at all”.

This said, the leaders’ recent announcement about the opening of new crossing points has led to an examination of demining needs in those areas, she added.

“UNFICYP stands ready to provide all the assistance we can, because clearing mines from Cyprus is a humanitarian imperative. As a United Nations Force Commander I personally hold this issue close to my heart. – I have been to Cyprus earlier but I didn`t dream that you still on this beautiful island have mines. Mines are terrible. That is why it is very important for me to engage because I don`t think this beautiful island should have mines at all”, Lund said.

“In 2015, thanks to good cooperation from both sides, there is now real momentum on demining in Cyprus. There is still work to do. This year we have seen progress. However, as stated by the Secretary-General in his latest report, a comprehensive approach to demining is now required”.

UNFICYP, she added, “echoes the calls of the Secretary-General for both sides to intensify their efforts to provide access to all remaining mined areas inside and outside the buffer zone to achieve, at long last, a mine-free Cyprus.