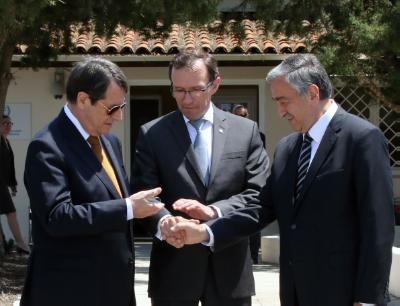 The UN Security Council has welcomed the resumption of peace talks on Cyprus, expressing hope for a comprehensive settlement based on a bizonal, bicommunal federation.

In a press release, issued late on Friday, the members of the Security Council UN welcomed the start of talks on a Cyprus settlement “within the mission of the UN Secretary General`s good offices”.

“The members of the Security Council expressed their hope that the leaders take advantage of this opportunity to reach a comprehensive settlement based on a bicommunal, bizonal federation with political equality, as set out in the relevant Security Council resolutions”.

The members of the Security Council reaffirmed their support for the process in line with the Joint Communiqué of 11 February 2014 and to the efforts of the UN Special Adviser Espen Barth Eide.

A new round of UN-backed talks began between the leaders of the island’s two communities on Friday to reunite the island, divided since the 1974 Turkish invasion.

The Cyprus talks were suspended in October 2014 by Cyprus President Nicos Anastasiades after Turkey violated Cyprus` Exclusive Economic Zone and issued a NAVTEX, committing part of the Republic’s exclusive economic zone. In addition the Turkish vessel Barbaros was conducting research out at sea. When Navtex expired and Barbaros withdrew, in early April, the wheels were set in motion to resume the talks.