UN Official expresses support to the peace process in Cyprus 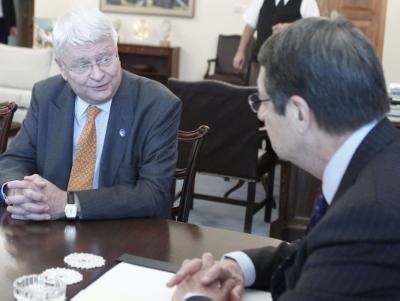 The UN-Under Secretary General for Peace Keeping Operations Herve Ladsous expressed to the President of the Republic of Cyprus Nicos Anastasiades the constant active support of the UN and especially UNFICYP, to the process that has developed between the leaders of the two communities in Cyprus.

President Anastasiades had a meeting on Monday with Ladsous in the Presidential Palace. Speaking after the meeting, Ladsous said that he also expressed the strong desire of the UN to be constantly supportive in terms of the good offices, in terms of helping develop confidence building measures.

The UN official said that he had the opportunity to visit Lefka the day before yesterday and saw “the very important work of demining.” He added that he also visited the Deryneia area “to see where things stood, because establishing more crossing points is very important so we will continue to work in that spirit of supporting all the efforts to unify the country and make it so that the two communities can live side by side harmoniously.”

Cyprus was divided in 1974 when Turkey invaded and occupied its northern third. UN backed talks resumed in May with a view to reunifying the island under a federal roof.