UN-led negotiations continue with a new meeting between Anastasiades-Akinci 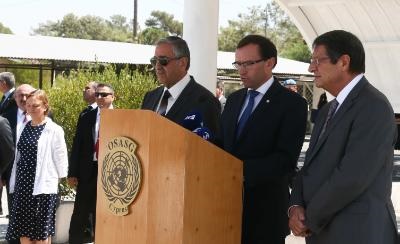 The leaders of the two communities in Cyprus, President Nicos Anastasiades and Turkish Cypriot leader Mustafa Akinci, are meeting on Monday for the second time in September, in the framework of the UN-led negotiations for a political settlement.

The meeting is scheduled to at 10 am (07.00 GMT) and will take place at the Good Offices in the United Nations Protected Area, in Nicosia, under the auspices of the Special Advisor of the Secretary-General Espen Barth Eide.

After their last meeting on September 1st, Eide referred to a positive and constructive dialogue between the two leaders in Cyprus which continues to create forward momentum. The two leaders focused their discussion on the current state of play, and in particular on property and governance-related matters, he added.

Negotiators of the Greek Cypriot and the Turkish Cypriot communities, Andreas Mavroyiannis and Ozdil Nami respectively, have embarked on a discussion concerning the sensitive issue of the property criteria, which are expected to be applied by an independent property commission to be set up with a view to resolving property claims.