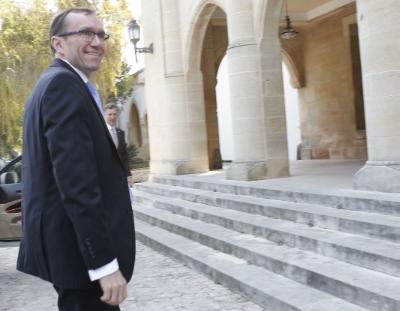 UN Secretary General’s Special Adviser on Cyprus Espen Barth Eide sees an opportunity for the resumption of the UN-led negotiations, aimed at finding an agreement to the Cyprus problem.

Speaking after a meeting he had with President Nicos Anastasiades, Eide said that there is a growing sense that the circumstances that led to the suspension of the talks may soon be over.

“We of course need to see that this is a fact before we can move on, but expectations are that within reasonable time we will be able to get back to a climate where we cannot only talk again but maybe even see if that talks can be accelerated. I feel that there is a wish and desire to now invest in this, after the crisis we have had”, he pointed out, noting that sometimes crises can help clarify people`s mind and illustrate that there are bigger issues out there that we have to meet together. So, I am significantly more optimistic than last time you saw me”, he said.

Asked when talks could resume, he said that the NAVTEX, issued by Ankara in early January, expires on the 6th of April and this is one factor which would contribute constructively to the resumption of talks.

“Also, all the developments in the gas sector seem now to move in such a direction that we may have a climate where talks can continue. It seems that a window maybe created where the mutual reasons for what has happened over winter are not there and if that momentum occurs, we will use it. What we are trying to do now is to talk about what we will do, if this is possible”, he said, adding that “assuming that we are moving into a better space then we will accelerate talks and try to see how far we can get.”

Invited to say if he means mutual secession, Eide explained that he is not talking about any agreed mutual secessions. “I am just looking at the different factors that are out there anyway”, he added.

To another question, Eide said that given the developments in the gas market, where the gas prices are low and so far the findings are not particularly promising, this is not something that can create some time to get back to the talks.

Asked if he still believes that this is the last chance to find a solution based on a bizonal, bicommunal federation, Eide said that now there is a real chance.

“I think people have to realize that we cannot go on year after year without any progress, because this problem has remained unresolved for many decades. Hence, at some stage there must be shared will to move on. I actually feel that this will is there. I just feel that in addition to the will there must be the right circumstances and if these circumstances occur, we must be ready to grasp the opportunity and use it constructively”, he said.

Asked again if this is this the last chance, he said that there will not be many more chances.