UN announces meeting of UNSG and Cyprus leaders in Davos 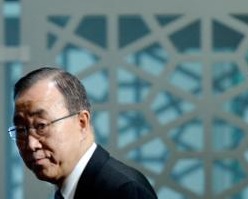 The UN has announced a meeting between UN Secretary General Ban–Ki-moon, President of Cyprus Nikos Anastasiades and Turkish Cypriot leader Mustafa Akinci on January 21st, on the sidelines of the World Economic Forum in Davos.

The purpose of the meeting, that will take place in the presence of the Special Adviser of the Secretary-General on Cyprus, Espen Barth Eide, “is to take stock of the state-of-play in the negotiations”.

The meeting takes place at the invitation extended by the UNSG to the leaders of the two communities in Cyprus.

Cyprus President Nicos Anastasiades announced yesterday that he had accepted an invitation he received on Thursday by the UN Secretary General Ban Ki moon for a joint meeting with Turkish Cypriot leader Mustafa Akinci, while the three of them will be in Davos later this month.

Anastasiades said in a post on his twitter account that he received on Thursday an invitation from the UN Secretary General for a joint meeting with Akinci in Davos, which he accepted.

Anastasiades and Akinci had on Thursday morning a new meeting in the framework of the UN-led negotiations on the Cyprus problem. In statements to the press after his return to the Presidential Palace, Anastasiades said that the negotiations are at a stage in which progress as well as difficulties are ascertained, adding that the two leaders reiterate their determination to find ways to respond to the concerns and the expectations of both sides.

Meanwhile, the UNSG and his Special Advisor for Cyprus will meet later today. Espen Barth Eide will brief the Security Council members on the state of play in the negations and on the recent good offices mission report of the Secretary General, followed by a statement to the press.

Anastasiades and Akinci have been engaged in UN-led talks since May 2015, with a view to solve the problem of Cyprus, divided since the Turkish invasion of the island in 1974.