Two innovative research centers inaugurated at the University of Cyprus 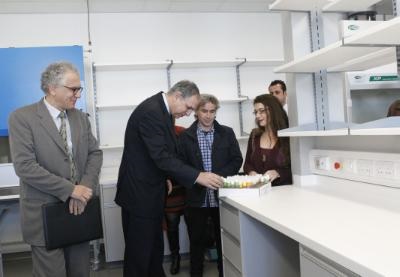 Minister of Education and Culture Costas Kadis inaugurated today two research centers at the University of Cyprus, which promote research in the areas of intelligent systems and networks and biological sciences.

The KIOS Research Center for Intelligent Systems and Networks began its operation in 2008 and the Drosophila Laboratory was set up two years ago contributing to a great extent to the research goals of the University of Cyprus.

In his inauguration speech, the Minister of Education said that the two research centers inaugurated officially today upgrade to a great extent the scientific and research profile of Cyprus.

He pointed out that the University of Cyprus has a steady course of development in the past years which is recognized in Cyprus and internationally as well.

Kadis said that Cyprus needs research and innovation now more than ever and added that the development of its universities constitutes a priority for the government.

Referring to KIOS center he said that it employs more than 80 researchers and has concluded cooperation agreements with internationally known research organisations, while the Drosophila lab promises important research results in the field of carcinogenesis and balance of intestinal function.

Rector of the University of Cyprus Professor Constantinos Christofides said that the University is the most important employer of young researchers in Cyprus with European funding. The current 550 researchers, he said, will be increased to 2,000 by 2020.

In addition, he said that when the university campus is completed with the construction of the School of Polytechnics and the School of Biological Sciences, the overall contribution of the University to the national income will be 0.4% per year, while this will open up more jobs and will increase economic activity.

The University of Cyprus, he said, has participated so far to 104 european programs with fundings of more than 30 million euro.

“The importance of a country is not measured by its geographical size or its population, it is measured by the brains of its youth. We need some clever and innovative ideas to uplift our country again. We have the creative minds and we have to trust them. And everything begins here. At the University”, he stressed.

Director of the KIOS Research Center Professor Marios Polycarpou of the Department of Electrical and Computer Engineering at the University of Cyprus said that the KIOS Research Center for Intelligent Systems and Networks aims to contribute to the advancement of knowledge in the area of intelligent systems and applications to the design and management of large-scale complex systems with emphasis on safety-critical and trustworthy systems.

The KIOS Research Center has extensive experience in coordinating externally funded research projects, both from European and National funding sources. This includes leading and active partnerships in several FP7 and other EU projects, as well as the coordination of the ESF-COST Action “Intelligent Monitoring, Control and Security of Critical Infrastructure Systems (IntelliCIS)”.

Director of the Drosophila Laboratory, Assistant Professor of the Department of Biological Sciences at the University of Cyprus Yiorgos Apidianakis said that the lab employs 15 researchers and its goal is to establish synergisms among gene allelles, microbes and the intestinal environment that predispose for intestinal inflammation and cancer.

The work of the team aims towards a deeper understanding of critical aspects of intestinal human disease, including inflammatory bowel disease and intestinal tumor formation and metastasis. The researchers use Drosophila genetics, histopathology and quantitative population genetics analysis to identify the host genes, microbes and dietary factors that mediate inflammation and predispose for cancer. Modelling of human diseases in flies is based on the high degree of conservation between Drosophila and mammalian signaling pathways controlling inflammation and cancer.