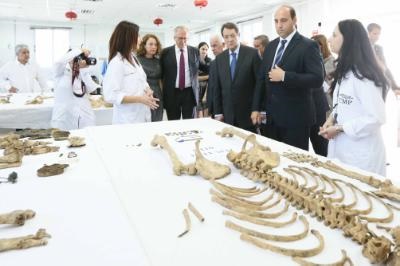 The exhumation program of the Committee on Missing Persons (CMP) is facing problems due to the Turkish stance, Presidential Commissioner for Humanitarian Issues and Overseas Cypriots Fotis Fotiou has said.

Speaking yesterday at a memorial service of those who lost their lives during the Turkish invasion in 1974 in the community of Lympia, Fotiou said that the program faces serious problems that can only be resolved by Turkey, which has to allow access to military zones in Cyprus’ northern Turkish occupied areas to try and locate and exhume any remains found and open the archives of the Turkish army.

Turkey`s behavior constitutes a provocation to humanity as it relates to the universal values of human life and dignity, he stressed.

Fotiou said that Turkey, which is the occupying power in Cyprus, must finally cooperate.

The Greek Cypriot side, he added, is making every effort so that the ongoing Cyprus negotiations lead to a successful outcome.

However, he pointed out that it is up to Turkey, which bears the responsibility for the situation in Cyprus, to contribute to the efforts to reach a solution.

As a result of the 1974 Turkish invasion against Cyprus, 1,619 Greek Cypriots were listed as missing, most of whom soldiers or reservists, who were captured in the battlefield. Many of those missing were last seen alive in the hands of the Turkish military. A further 41 more cases of Greek Cypriot missing persons have been added. These cases concern the period between 1963-1964, when inter-communal fighting broke out but none of them has been identified yet. The number of Turkish Cypriot missing since 1974 and 1963/64 stood at 503. A total of 1073 remains have been exhumed by the CMP, 546 of whom have been identified with the DNA method (421 Greek Cypriots and 125 Turkish Cypriots).

Only 27% of all missing persons have been identified so far.

The Committee on Missing Persons in Cyprus (CMP) is a bi-communal body established in 1981 by the leaders of the Greek Cypriot and Turkish Cypriot communities with the participation of the United Nations. Following the establishment of an agreed list of missing persons, the CMP’s objective is to recover, identify, and return to their families, the remains of 2001 persons (502 Turkish Cypriots and 1,493 Greek Cypriots) who went missing.

The CMP employs a bi-communal forensic team of more than 60 Cypriot archeologists, anthropologists and geneticists, who conduct excavations throughout the island and anthropological and genetic analyses of remains at the CMP Anthropological Laboratory.

The Republic of Cyprus has been divided since 1974 when Turkey invaded. It still occupies 37% of this EU Mediterranean country, despite repeated calls by international and European organizations to withdraw its troops from the island.

UN-led Cyprus talks resumed this month. They were interrupted by the Greek Cypriot side due to Turkey`s violation of Cyprus` Exclusive Economic Zone.