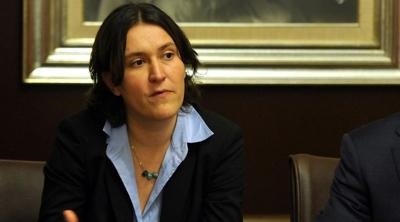 Dutch MEP and Rapporteur on Turkey`s progress report Kati Piri welcomed on Wednesday the resumption of Cyprus talks for the reunification of the island and spoke of a unique window for a solution to be reached for the benefit of all Cypriots.

Piri said the progress report should be a point of reference for Turkey. We do not want to shut the door on Ankara, she pointed out, but rather to help it move forward with all those reforms that are necessary.

In a comment by CNA that Cypriot MEPs and parties have criticised the report as one-sided and have said it does not clearly state Turkey`s responsibilities, Piri spoke of a “misconception”.

The report, she said, is very critical but also very constructive for Turkey, it clearly calls on the country to implement the Ankara Protocol and it contains a reference to the UN Convention on the Law of the Sea (UNCLOS). She added that it also contains positive references as regards the rights of the Republic of Cyprus within its Exclusive Economic Zone (EEZ).

The Republic of Cyprus` positions on opening chapters for Turkey`s accession course are well known, she pointed out, adding that the European Parliament is fully in line with the Council`s positions on the matter.

The Dutch MEP continued noting that there is nothing less in the report that hasn`t been included in reports on Turkey for the last ten years.

We are very persistent when it comes to Cyprus, she said.

Piri also said that the European Parliament praises Turkey`s contribution to the refugees` drama in the region and that it has hosted more refugees than any other country.

However, she expressed the institution`s concerns over matters regarding freedom of press, justice, the incarceration of journalists etc, pointing out that Turkey needs to take steps.

Despite concerns, she said, we cannot shut the door on Turkey but rather help it through more intense negotiations to go ahead with reforms.

Cyprus has been divided since Turkey`s invasion and subsequent occupation of its northern third.