Tsipras: Greece and Cyprus, anchor of stability for European security 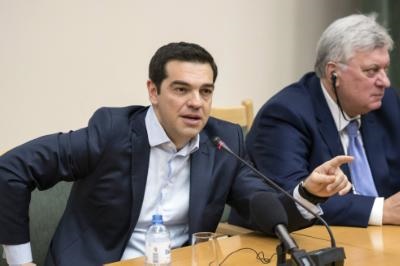 Greece and Cyprus are an anchor of stability for European security, Greek Prime Minister Alexis Tsipras said on Thursday in Moscow.

«Greece, as well as Cyprus constitute an anchor of stability for our common European security, in the center of a region οf destabilization,” Tsipras underlined, referring to the situation in the Ukraine, Libya and Syria.

Speaking at the Moscow State University of International Relations, during the second day of his official visit to Russia, the Greek Prime Minister said that Athens follows a policy of actively supporting Cyprus and backs every effort aiming at a just and lasting political settlement on the basis of the relevant UN resolutions.

He also said that achieving security and peace in the broader Eastern Mediterranean is also linked to the protection “of our national sovereignty and sovereign rights against Turkish claims and disputes.”

In addition, Tsipras said that Greece supports the cooperation with Egypt, Israel and all the countries of the Eastern Mediterranean, in the framework of respect of international law and a peaceful policy for the region.

He added that Greece considers important the dialogue with Russia, a permanent member of the UN Security Council, with traditional ties with countries of the Eastern Mediterranean and the Balkans and with an important role in issues such as the Cyprus problem.

The Republic of Cyprus, an EU member state since 2004, has been divided since 1974 when Turkish troops invaded. Turkey still occupies 37% of this Mediterranean island`s territory. UN – led peace talks to reunite the country will resume this spring, after Turkey’s NAVTEX was not renewed and its research vessel Barbaros withdrew from the region. These two developments forced Cypriot President Nicos Anastasiades to suspend his participation in the talks last October, as the Republic’s Exclusive Economic Zone was violated by Turkey.