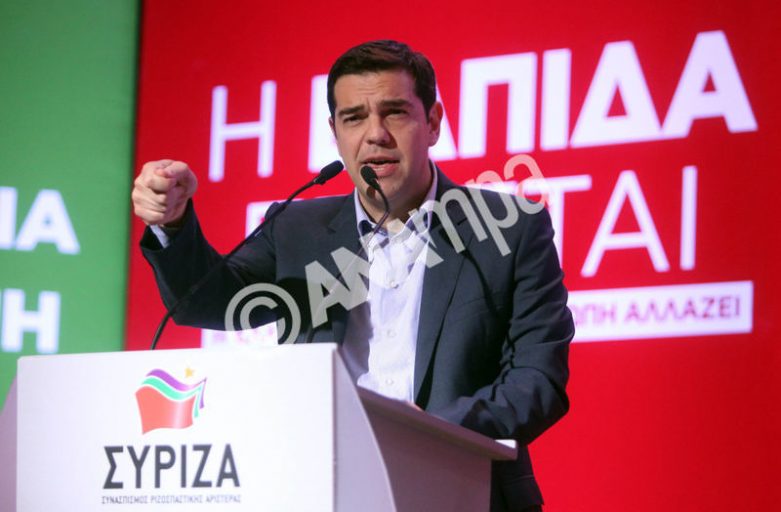 SYRIZA leader Alexis Tsipras, who on Sunday delivered a speech in Volos, central Greece, called on citizens to enable the party to form a majority government on January 25.

Tsipras addressed voters in the centre of the political spectrum and in particular those supporting New Democracy (ND).

“Mr. Samaras thinks he owns the traditional voters of New Democracy, the conservative voters of the middle class. But he will be proven wrong,” he said and added: “I send a clear message to ND voters: Give us power and join us in demanding a better solution for our country, within the eurozone. Our goal is to unite Greeks and turn social sensitivity – which is no one’s monopoly – into action.”

He commented on those who being in panic are now trying to terrorize people and gave assurances with specific responses on six crucial points. First, that SYRIZA’s policy will strengthen the euro without any further sacrifice on the part of the citizens. Second, that SYRIZA guarantees Greek citizens’ deposits. Third, that it pledges to abolish the Uniform Real Estate Ownership Tax (ENFIA) in 2015 and suspend any primary residence foreclosure. Fourth, that it guarantees a fair tax system, by resetting the tax-free threshold at 12,000 euros. Fifth, that it pledges to put an end to corruption and guarantees that justice and democracy will return to the country. Six, that it guarantees SYRIZA will implement the programme it presented at the Thessaloniki International Fair (TIF) to deal with the humanitarian crisis as soon as it forms a government.

He also referred extensively to unemployment and put forward a proposal for a 751 euro minimum wage. He spoke of the restitution of collective agreements and labour legislation, abolition of regulation for mass layoffs and referred to a plan for 300,000 new jobs and a series of social measures.

He reiterated that the issue of the Greek debt can be solved only with a European conference and radical proposals. The only way out now is the write off of the largest part of the debt along with a grace period and a growth clause in its repayment, he stressed.