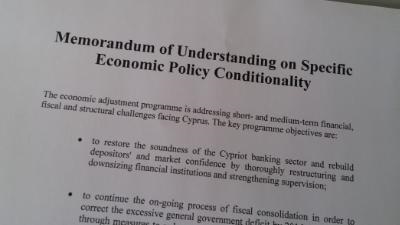 Cyprus` international lenders, the European Commission, the ECB and the IMF, are set to conclude the island`s sixth economic programme review on Friday.

The heads of the three institutions, collectively known as the Troika, will meet with the Central Bank of Cyprus Governor Chrystalla Georghadji with whom they are expected to agree the updated Memorandum of Understanding concerning the financial sector.

On Thursday, the Troika heads held a six-hour meeting with Minister of Finance Harris Georgiades and Undersecretary to the President Constantinos Petrides, covering all issues concerning the fiscal sector and the structural reforms.

Reliable sources have told CNA that the authorities have agreed that the landmark for loan securitization (sale of banking loan portfolios to non-banking third parties) is set for July.

Other sources have told CNA that the Troika was satisfied with the progress achieved on public sector reforms and that all government proposals concerning the promotion and mobility of civil servants will be incorporated in the updated Memorandum. The government proposals on the reform of the civil service should be approved by the Cabinet by the end of June, according to the timetable set by the international lenders.

Moreover, the budgetary and macroeconomic commitments of Cyprus for 2015 were also agreed during the discussions and the assessment of the European Commission for 0.5% recession in 2015 was adopted, despite the fact that the Finance Ministry expects marginal growth. At the same time the aim for primary surplus was brought forward a year, to 2015, from 2016.

Regarding the insolvency framework, the lenders agreed for its implementation as it was voted by the House of Representatives in order to decide later whether there is a need for some changes.

In March 2013, Cyprus concluded a €10 billion bailout with the Troika, to avert the collapse of its banking sector and cover its refinancing needs.