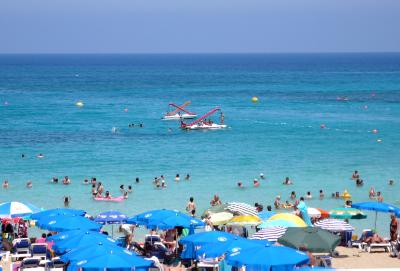 Countries like England, Germany, France, Holland, Belgium and the Scandinavian nations are expected to make a difference in this year`s summer season, President of the Board of Directors of the Cyprus Tourism Organisation (CTO) Angelos Loizou has told CNA, expressing optimism for the island’s tourist industry.

Loizou said that a lot of efforts are made to attract these traditional countries back to the island, recalling that until 2001, tourists from these countries flocked to Cyprus before competition from neighboring countries such as Egypt, Turkey started.

Now, he said, these countries are responding in a positive manner but it takes time time and coordinated effort from all sides to bring results.

Referring to the German market, Loizou said it is all but sure that more German tourists will visit .

“We will have flights by two new airlines of” GERMANIA ” and “GERMAN WINGS”. “GERMANIA” began flying tentatively in November but flights increase in March. On Wednesday the “GERMAN WINGS” will operate the first of seven weekly flights to Paphos,” he added.

There is also interest from France due to events in countries such as Tunisia, Morocco, Egypt, with the French seeking Cyprus as a safe destination.

Referring to the latest statistics which recorded an increase in tourist arrivals, Loizou noted that after many years there is a positive trend and an increased flow of tourists from traditional markets.

The most encouraging, he said, is that although Cyprus depended on some countries, this is changing and other countries are put on the spotlight such as Israel, Poland and the Arab countries.

It is worth noting that tourist arrivals follow an upward trend since last December after reduction, a 12-month basis, observed in tourist arrivals in September, October and November 2014 (11.5%, 8.1% and 0.1 %, respectively). In 2014, the increase in tourist arrivals was finally limited to 1.5%, while revenues have declined 2.8% compared with 2013.

“We monitor closely the ruble because that is what will probably determine the outcome, which seems to stabilize. The message we get is that there will be some reductions from tour operators, but this seems to be at a level that we can handle”, he concluded.