Thousands of Greeks rally in Athens in solidarity with France 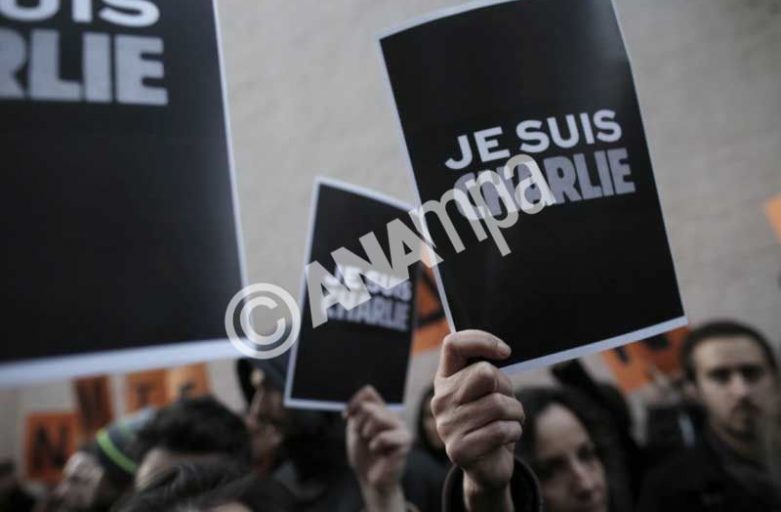 ANA -MPA — More than 2,000 Greeks gathered outside the French Institute of Athens on Thursday to express solidarity with the people of France and condemn a deadly attack on the offices of the satirical magazine “Charlie Hebdo” in Paris on Wednesday.

In front of the Institute’s door hung a large black banner with the phrase “Je suis Charlie”, while other protesters formed a line and held up a letter each spelling out in Greek: “I do not hate, I am not afraid.”
“We are moved by the solidarity shown by Greeks,” the French ambassador to Greece Jean Loup Kuhn-Delforge told ANA-MPA, noting the close bonds shared by the two nations. Kuhn-Delforge also said the French people will face the massacre united.

Athens mayor Yiorgos Kaminis said he sent a letter to his peer in Paris, Anne Hidalgo, expressing his “unequivocal condemnation of the abhorrent murderous attack” against Charlie Hebdo. He also said he later spoke to her on the phone.

Among those who expressed their condolences was the president of the Athens union of journalists, Maria Antoniadou, who said that “in this fight we are all united. Journalists cannot be terrorised.”
Former foreign minister Dora Bakoyianni noted: “We’re not afraid of anyone. We’ll fight the battle and we’ll win it.”

Main opposition SYRIZA MP Vasiliki Katrivanou expressed her shock and spoke of an attack against democracy and freedom of speech, while PASOK spokeswoman Eva Kaili said the solidarity shown by Greeks is important.

Writer Vassilis Vasilikos, who is heading the Democratic Left’s (DIMAR) nationwide “State Deputies” ballot ticket in the January 25 elections, told ANA-MPA “such heinous crimes happened in the city of light, which means we’ve returned into the darkness of the Middle Ages.”

The condolences book was also signed by the leader of To Potami party Stavros Theodorakis and other politicians and intellectuals who took part in the rally. “We’re all French, we’re all cartoonists and we’re not afraid,” he said. “We must not allow this terrible crime by extremists terrorise Europe and cause panic. We have to safeguard the multiculturalism of Europe, we have to isolate extremists.”

The rally was also attended by French nationals living in Athens. “I’m here for freedom of speech. We’re not afraid,” Corinne told ANA-MPA.
“We’re here for article 17 of the Human Rights Treaty on freedom of expression,” 16-year-old Theo who attends a French school and his father is a journalist in Strasbourg said, while his schoolmate Ariadne noted the threat of an increase in racism after the terrorist hit.

Hundreds of Greeks also rallied in the northern city of Thessaloniki with protesters holding placards saying “Je suis Charlie” and leaving flowers for the 12 victims of the killings at the steps of the Institute, as well as pencils, pens and papers – the main tools of trade of cartoonists.