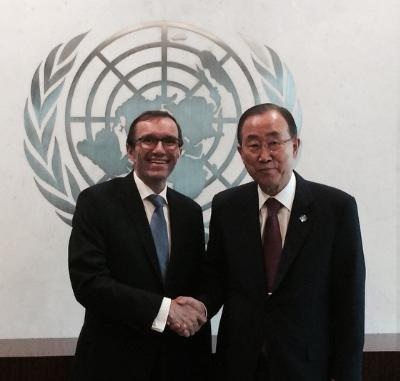 The United Nations should make it clear and present the true picture with regard to the current deadlock in the Cyprus peace talks, government sources told CNA on Saturday, invited to comment on the UN Secretary General`s report on UNFICYP which was handed to the members of the Security Council yesterday.

In his report, Ban Ki-Moon calls on both sides in Cyprus to refrain from the “blame game” and from negative rhetoric about each other, urging all interested parties to help create a conducive environment for resuming structured negotiations in a results oriented manner as agreed to by the leaders in the Joint Declaration of 11 February 2014.

Asked to comment on the observation that the UN appear in the report to be adopting an equal-distance policy as to which side is responsible for the deadlock in the Cyprus talks, the same sources said that the United Nations should take into account Turkey`s decision to issue a new NAVTEX and speak out loud and clear, giving the true picture of the party that is responsible for the failure to resume the talks.

The same sources expressed the view that the actions taken by Cyprus President Nicos Anastasiades highlighted the constructive stance and willingness of the Greek Cypriot side to return to the negotiating table. Unfortunately, they noted, Turkey has not moved in that direction. Instead, Ankara has proceeded to issue a new NAVTEX, which – as they said – is something that is expected to be acknowledged by the United Nations.

Meanwhile, on Monday, President Anastasiadis has invited to the Presidential Palace all accredited ambassadors to Cyprus to brief them on the latest developments in the Cyprus problem.

Earlier on the same day, the President will chair a meeting of the Council of party leaders which will discuss developments in the Cyprus issue, the issue of forclosures and the President`s proposal to form a broad-based government.

Moreover, the Special Adviser to the UN Secretary General on Cyprus Espen Barth Eide arrives in Cyprus on Tuesday for a short visit during which we will hold meetings with the leaders of the two communities in an effort to break the deadlock in Cyprus issue and resume talks.

The President will receive Eide on Wednesday.

Repeated calls for the withdrawal of Barbaros went unheeded by Ankara, which announced on Tuesday the NAVTEX`s extension until April 6, 2015.

Turkey, whose troops occupy Cyprus’ northern part since they invaded in 1974, does not recognize the Republic of Cyprus, in spite of numerous calls by the EU, which Ankara aspires to join, to do so and normalize relations with Nicosia.