The Czech Republic will stand by Cyprus, assures President of the Chamber of Deputies 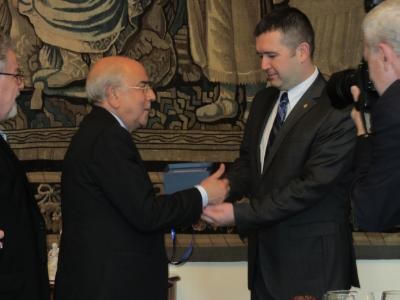 Cyprus has a friend which is always trying to help and support it, assured President of the Chamber of Deputies of the Parliament of the Czech Republic Jan Hamáček.

Speaking after a meeting with visiting President of the Cyprus House of Representatives Yiannakis Omirou, Hamacek assured his country will continue supporting Cyprus in the future.

In statements after the meeting, Omirou said they discussed a wide range of issues, with the Cyprus problem topping the agenda.

The Czech Republic`s position is a position based on principles that derives from UN Security Council resolutions and the fundamental principles and values of the EU.

He said he briefed his Czech counterpart on the Turkish violations of Cyprus’ Exclusive Economic Zone which constitute a violation of international law, deriving from the 1982 United Nations Convention on the Law of the Sea.

Omirou said Hamacek supports the sovereign rights of the Republic of Cyprus.

He said they also discussed the economic situation in Europe and he expressed the positions of the House of Representatives which call for abandoning austerity and adopting policies which favour development, creating new job opportunities and social cohesion.

In the discussion about the situation in Ukraine, there was identity of views that it should be resolved with political and diplomatic means according to the Minsk Agreement of 15th February.

The two presidents also discussed the role of Cyprus in handling Islamic State terrorism, noting that both agree that coordination and cooperation is required to effectively deal with the threat against security in the region, Europe and throughout the world.

“We are two EU member states, sharing the same responsibilities and repercussions on many issues”, Hamacek said, noting they have identical views.

He assured Omirou that the Czech Republic is a friend of Cyprus and has always supported Cyprus and will continue to do so in the future.

Signing the book of visitors, Omirou expressed the willingness to further enhance parliamentary cooperation between the peoples of Cyprus and the Czech Republic. Both parliaments, he said, maintain strong bonds of friendship, excellent relations and mutual solidarity which are strengthened through our European course.