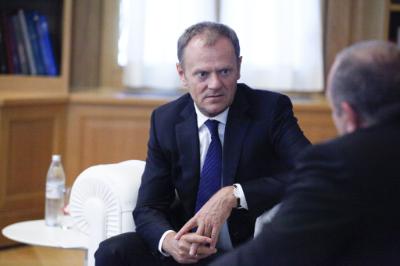 The Cyprus question, the economy and the Republic`s role in the region will be on the agenda of talks President Nicos Anastasiades will have with the President of the European Council Donald Tusk, during his forthcoming visit to Nicosia.

“The Cyprus problem, the economy and the role Cyprus can play in the region, taking into account the President`s initiative to have the Israeli Prime Minister and the Palestinian President invited to address, on separate occasions, the European Council, are among the issues to be discussed by the two Presidents,” the Spokesman said.

Invited to comment on a proposal to turn Cyprus into a port for the transport of goods to Gaza, he said Nicosia is ready, in consultation and cooperation with regional countries, to provide any help requested.

This proposal, he explained, is an idea discussed in the past and if implemented it will prove in fact the role of the Republic of Cyprus can play in the region.
CNA GS/MM/2015
ENDS, CYPRUS NEWS AGENCY