Tennis: To win at Wimbledon was ultimate dream, Tecau says 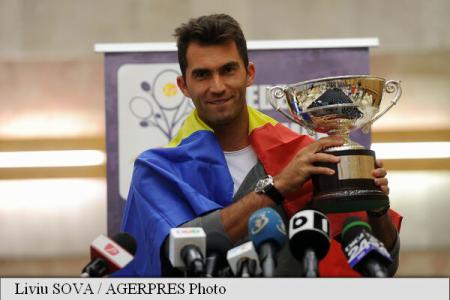 Romanian tennis player Horia Tecau said on returning back to Romania, at Bucharest Henri Coanda Airport late on Monday that to win Wimbledon men’s doubles title had been his “ultimate dream”.

“I am enormously happy, on Saturday I fulfilled a dream, I was thrilled, I lived wonderful experiences in this field, at Wimbledon. I had wonderful weeks, I had got to playing three finals before. But I think that not even 20 finals could compare to a title obtained and more so with my friend Jean-Julien [Rojer]. It was something fantastic. I do not realize what happened, I have been partying since I finished that final and I am very happy that I can bring this trophy home”, Tecau said at the airport.

“For me, it was the ultimate dream. I must get back to my senses, to enjoy this trophy and find another dream. I think the next dream for me will be the US Open title. The US Open tournament, the World Tour Finals, I must find another dream for me, another motivation to keep going and now, having tasted the dream, having tasted this experience of winning a Grand Slam tournament, we wish to live this moment again”, he underscored.

Tecau, who alongside Dutchman Jean-Julien Rojer advanced to the top spot in the ATP Race to London rankings ahead of Barclays ATP World Tour Finals said he had a premonition that he would win the All England Club trophy. More…