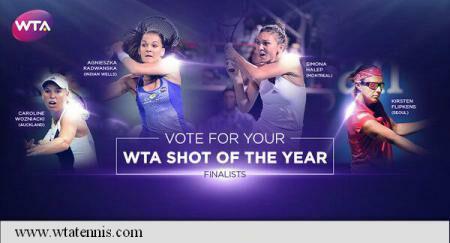 Tennis players Simona Halep (Romania), Caroline Wozniacki (Denmark), Agnieszka Radwanska (Poland) and Kirsten Flipkens (Belgium) are the four finalists of the survey for WTA Shot Of The Year, placing on the top two positions in the two Shot Of The Month winner groups posted on the WTA website.

Final Group voting is open until November 28, and the winner will be announced on November 29.

Simona Halep won the Shot Of The Month online voting contests in May — with a shot against Swiss Timea Bacsinszky in the Mutua Madrid Open that earned her 70 percent of the votes — and in July, when she turned around an apparently unwinnable point in the battle against Australian Daria Gavrilova, which brought her 79 percent of the votes. More…