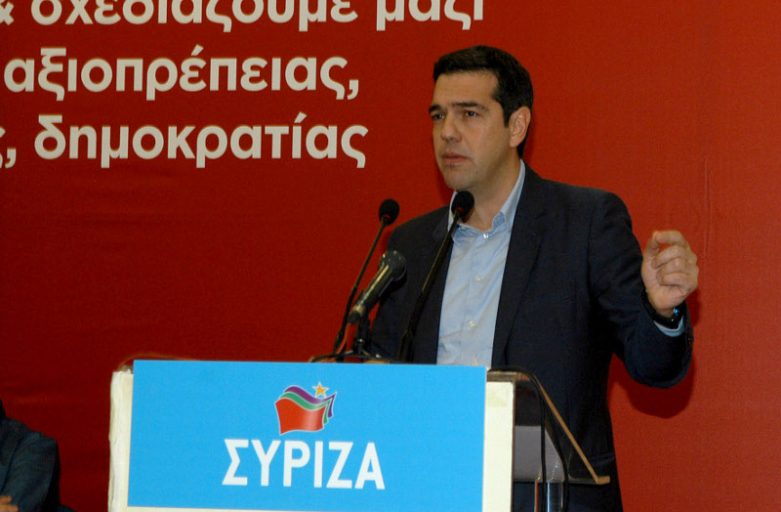 Tsipras called Samaras “prime minister of the cafe” saying that at the parliament’s cafe referred to bank deposits that will be sent abroad and charged a “behind the scenes irregularity” by an ‘extreme-right environment” in the Maximos Mansion that plots also charging the co-governance that ‘it burns everything and makes favours to the big interests because it knows that it is leaving”.

Referring to Stournaras’ statement of the danger for an ‘irreversible damage” Tsipras said that his duty is to protect the economy.

“In Greece only exists a center of propaganda that attempts to keep alive a corrupted political system” said Tsipras adding “Remember what we said about the triangle of sin. Of a system that with the State’s money produces information for its interest, information that attempt to impose the policy for its own benefit and works in order more money to be produced for the few and the selected. That’s collusion and the triangle of the sin that bankrupt the country’. On one edge is the bankrupt system of New Democracy and PASOK on the other the bankrupt banks that were rescued with the people’s money and afterwards were given back to those that bankrupted them and on the third edge the over-indebted, totally unreliable, media. That’s the center that governed forty years and took for itself 70 billion euros from the European Funds. It’s the centre that made the State its client and burdened the public debt on the Greek people’s households. That’s the center that today terrifies blackmails and misinforms, sets parties, dissolves parties and divides parties and conducts auctions of conscience. That’s the centre that recently has left aside every pretext and insults the truth, the democracy and even the economy”.

All these will finish underlined Tsipras “whatever you do you can’t blackmail us or play with us”. He also said that when SYRIZA becomes government will seek not only the political but also the criminal responsibilities from those who are responsible for the country’s disaster.

On the alleged attempted bribery of MP Pavlos Chaikalis, Tsipras noted “We have a bankrupt political system that attempts to cover the stench”.

The main opposition leader said that the country is already in an elections campaign and charged the co-governance that wants to hold the elections in a climate of terror and scaremongering adding that SYRIZA will not follow on this slippery path and that it will stay calm in order to unite and not to divide the Greek people.