Spokesman: No agenda for Anastasiades-Akinci dinner 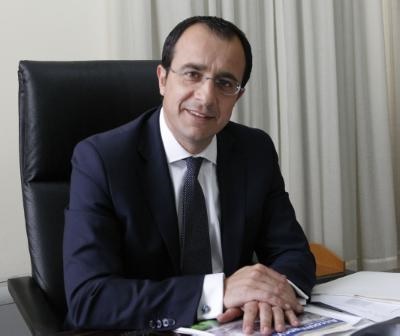 In statements about the dinner, Christodoulides said that a meeting between Eide, Anastasiades and Akinci will take place at 2000 local time, to be followed by the dinner that will also be attended by the two sides` negotiators.

He said that “as things stand right now, what we expect is for the UN to announce the date for the resumption of the talks just after the conclusion of the dinner.”

Replying to a question, Christodoulides said that negotiations will begin in May but the exact date will be agreed tonight.

As regards the agenda of the negotiations, Christodoulides said that “it will be as agreed in September 2014 and the first group of issues on which cross negotiations will take place are the territorial issue, the property issue and governance.”

As regards the issue of the illegal airport of Tymbou in the occupied part of Cyprus, Christodoulides said that “we are conducting tabletop exercises” adding that “what is currently on the table is the proposal of the President of Cyprus (for the return of Famagusta to its legitimate citizens). We have not been officially informed about the intentions or the positions of the Turkish side,” he said, adding that this is a very serious issue and that no positions can be expressed on it based only on public statements.

He said that if such an issue comes up the two main criteria that need to taken into consideration is the status of legality, of the one and single sovereignty of the Republic of Cyprus, and that any confidence building measure must support the goal for which negotiations take place, which is to terminate the unacceptable status quo and reunite Cyprus.

Replying to another question he said that “we are ready to respond to any actions taken by the Turkish side on any issue.”

Christodoulides also said that Anastasiades will hold meetings aiming to promote the involvement of UN Security Council members in efforts to solve the Cyprus problem. He noted that Anastasiades had on Monday a meeting with US Ambassador in Cyprus while during the next days he will have meetings with the UK High Commissioner, and the Ambassadors of Germany, France, China, Russia, and Spain.

He also noted that the President has called for a meeting of party leaders that will take place on May 13, to inform them about latest developments in the Cyprus problem.