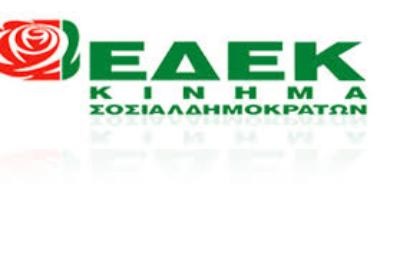 Social Democrats Movement EDEK Central Committee has decided that the party cannot accept bi-zonal bi-communal federation, either as the name or the content of a solution in Cyprus, saying that “federation cannot co-exist with bi-zonality or even more with bi-communality.”

The Committee decision will be tabled before a party congress to be held on June 14. Members of the congress may approve, reject or amend the decision.

In its decision on Sunday, the Committee outlined the reasons for which the party does not accept this form of solution, noting that “it is racist, it promotes ethnic and communal partition, it is undemocratic because it equates the minority with the majority, it deprives citizens of their right to be elected at their place of residence.”

Moreover, “it introduces restrictions to the establishment and the purchase of property, it makes Cypriot citizens second-class EU citizens, it legalizes and reinforces illegal settling and the distortion of the demographic character, it establishes a state under custody, it is defined by a complex decision-making process and by complicated international representation, which leads to deadlock and intractable problems and provides for the presence of foreign troops.”

EDEK maintains that the proposed bi-zonality provides for borders and that bi-communality includes guaranteed majorities of people and property. It provides for political and human rights restrictions, elements which do are not consistent with a federation but with a confederation.

At the same time, EDEK`s Central Committee assured that the party will struggle for the continuation of the Republic of Cyprus, noting that the state that will come out of a solution must be really democratic, must safeguard political and human rights for all its citizens all over the island, exclude foreign troops and illegal settlers and ensure that all refugees have the right to return to their ancestral homes.

Furthermore it noted that it must make sure that third counties are not entitled to exercise custody over the Republic of Cyprus in any way, and called on all Greek Cypriot parties and that Turkish Cypriot leadership to express clearly their positions on these principles for a Cyprus settlement.

EDEK Central Committee said that cooperation and co-existence with Turkish Cypriots, with no racist or other limitations, must be developed.