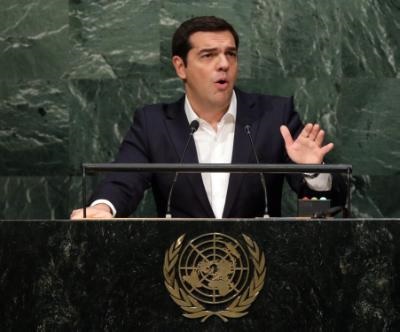 It is shameful that for the last 41 years the Republic of Cyprus remains divided, Greek Prime Minister Alexis Tsipras has stressed.

Addressing on Thursday the UN General Assembly in New York, Tsipras said that today, more than ever and in light of the instability in our region, it is important that the momentum is grasped for a mutually acceptable, just, viable and comprehensive solution to the Cyprus issue.

He also underlined Greece`s full support to the Cyprus talks noting that the solution must be based on the relevant UN Resolutions and on Cyprus’ membership of the European Union, “to the benefit of all the people of Cyprus- Greek and Turkish Cypriots – as well as all other communities”.

“And truly it is shameful that for the last 41 years – the same number as my age- Cyprus remains divided”, he underlined.

Tsipras noted that any real and lasting solution will have to eventually deal with the international issue of security, “the cancellation of the anachronistic Treaties of Alliance and Guarantees and the withdrawal of all foreign troops, including the troops occupying the northern part of the island”.

Referring to the Greece-Turkey relations, he said that the full respect of good neighbourly relations and international law by Turkey, as well as a just and viable solution to the Cyprus issue, remain a pre- condition for full normalization of Greek-Turkish relations.

Meanwhile, Greek Minister of Foreign Affairs Nicos Kotzias held a meeting yesterday in New York with UN SG`s Special Advisor for Cyprus Espen Barth Eide during which he raised once more Athen`s positions `as regards the problem of guarantees and the withdrawal of the Turkish occupation army`.

In addition, Kotzias held a meeting in New York with his Turkish counterpart Feridun Hadi Sinirlioglu with whom he discussed Greek – Turkey relations, the Cyprus issue, the refugees crisis and other.

The Greek Foreign Minister sent a congratulatory letter to his Cypriot counterpart Ioannis Kasoulides on the occasion of Cyprus` Independence Day.

«The respect of the independence of Cyprus, the continuous cooperation and coordination with the Cypriot government are the cornerstone of Greece`s policy”, he stressed.

The common strategic goals of Athens and Nicosia, he added, include the termination of the Turkish occupation and illegal settlers, the withdrawal of all Turkish troops and the cancellation of the anachronistic system of guarantees of 1960, in the framework of a just and viable solution on the basis of the UN decisions and the EU principles.

Cyprus has been divided since 1974, when Turkey invaded and occupied its northern third. UN-backed talks, aiming to reunite the island under a federal roof, resumed on May 15, this year.