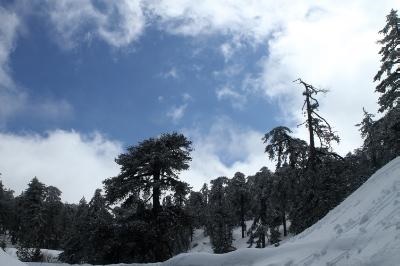 Cyprus will be hit by intense weather conditions on Monday and Tuesday which will bring rain, snow, thunderstorms and strong winds. The temperature will fall by around 2-3 degrees Celsius.

“There is already some snow on top of Troodos mountains, the scenery is white, but we are expecting more snow the next few days”, Stavros Vasileiadis of the Meteorology Department told CNA.

He said that according to the weather forecast, in the afternoon and evening we are expecting showers and isolated thunderstorms as well as snow up in the Troodos mountains.

The same conditions will prevail tomorrow as well with temperatures of 15 degrees in the inland and 17 at the coast which are normal for this time of the year.

Vasileiadis added that on Sunday the weather will be partly cloudy and as of Monday it will be rainy with thunderstorms at some areas, snow in the mountains and probably in areas with lower altitude as well as strong winds 7-8 Bf.

Asked about the temperatures he said that the forecast shows that they will fall by around 2-3 degrees.

“The forecast shows that on Monday and particularly on Tuesday the conditions will be severe, so we urge the citizens to be extra cautious as we are expecting rain, thunderstorms and strong winds. Snow will fall in the Troodos mountains and probably in lower areas”, he added.