Russian Ambassador: Solution must not be imposed on Cypriots 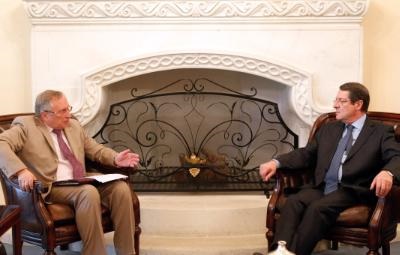 The solution of the Cyprus problem must not be imposed on the Cypriots, Ambassador of the Russian Federation in Nicosia Stanislav Osandchiy has stressed.

The Ambassador, who was received today by President of the Republic Nicos Anastasiades, told reporters after the meeting that Russia is willing to contribute to the efforts for a Cyprus solution but is not interfering.

The solution, he added, must come from the Cypriots themselves and must not be imposed on them.

The Ambassador was also asked to elaborate on a Russian Foreign Ministry announcement which called on all parties involved not to interfere in the Cyprus talks. Asked to whom it was addressed, the Ambassador said `to all` and added that “we are in favor of a solution found by Cypriots themselves. We do not want to see a solution imposed on them”.

“This is why we say those things. The solution must be found here in Cyprus and not anywhere else”, he stressed.

Russia, he went on to say, supports any solution that will be acceptable by the two communities in Cyprus pointing out that the solution must be in line with the UN Security Council resolutions.

The Cyprus issue was not the only topic discussed during the meeting. President Anastasiades and the Russian Ambassador also discussed the situation in the Ukraine and other regional concerns.

Cyprus has been divided since the Turkish invasion in 1974. A new round of talks under UN auspices resumed this month after eight months of stagnation due to Turkey`s violation of the sovereign rights of Cyprus in the Cypriot Exclusive Economic Zone.