Resumption of Cyprus talks expected to be announced next Monday 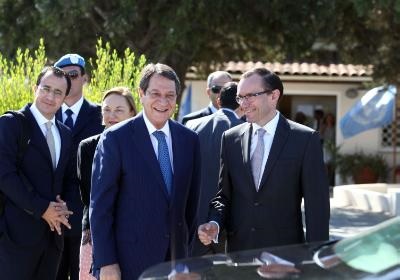 The official resumption of the Cyprus peace talks will most probably be announced next Monday, Government Spokesman Nicos Christodoulides said today.

In statements to the press at the Presidential Palace, Christodoulides said that UNSG`s Special Advisor for Cyprus Espen Barth Eide will be received tomorrow by President of the Republic Nicos Anastasiades.

“Surely, among the issues they will discuss will be the official resumption of the Cyprus talks, which will most probably be announced right after the dinner hosted by Eide to the leaders of the two communities in Cyprus (President Anastasiades and new Turkish Cypriot leader Mustafa Akinci) next Monday”, Christodoulides said.

Replying to questions, he said that the negotiations will begin, at the latest, in the second half of May.

The Spokesman said that all UNSC member states, especially the P5, are expected to have an active involvement in the process, noting that the government welcomes this.

Replying to questions on Confidence Building Measures (CBM), the Spokesman said that the only proposal on the table is the one submitted by President Anastasiades regarding the Turkish occupied city of Famagusta and its fenced off area, called Varosha.

Noting that the CBM constitute an initiative by the President Anastasiades, he said that substantive CBM can give an added value to the Cyprus talks.

The Greek Cypriot side, he said, is willing and ready to discuss any CBM that would give an end to the unacceptable status quo and would lead to the reunification of the island.

Concluding, he said that the President will convene a meeting of his top advisory body on the handling of the Cyprus issue. The National Council will convene after the return of President Anastasiades from Moscow where he will attend the events to mark the end of the WWII. The President will return to Cyprus on the 10th of May.

The Republic of Cyprus has been divided in 1974 when Turkey invaded and still occupies 37% of this EU Mediterranean country, despite repeated calls by international and European organizations to withdraw its troops from the island.

Abandoned by its Greek Cypriot inhabitants as they fled the advancing Turkish troops in the summer of 1974, Varosha has remained under Turkey`s direct control since then and has been dubbed a `ghost town` despite UNSC resolutions to hand over the administration of the area to the UN.