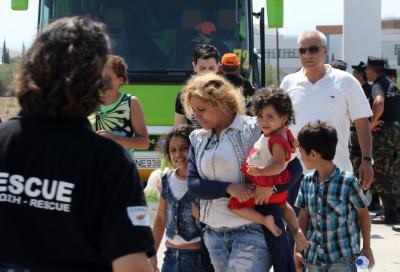 Refugees, rescued earlier today by the Cypriot authorities off the southern coast of Larnaca, are now accommodated at reception centres. Some opted to apply for political asylum and are at a special centre for asylum seekers.

All of them are exhausted after three days at sea and disappointed that they did not reach their final destination, the European continent. The small boat they were travelling in sent a distress signal late last night and Cyprus mounted a rescue operation to save them.

Three buses, carrying 87 out of the 115 rescued Syrian, Lebanese and Palestinian refugees, arrived after twelve noon at Kokkinotrimithia reception centre.

According to the Deputy Chief of the Civil Defence Loukas Hadjimichael, 20 persons have asked for political asylum and are now at Kofinou reception centre.

Another three will go to Kokkinotrimithia later today, once they undergo some medical examinations. Five unaccompanied minors have been placed under the protection of the Welfare Office in Larnaca, where they first landed.

Among the 115 people who arrived in Cyprus, 35 are underage children and are in a particularly bad shape, barefoot and without any clothes. The Cyprus Red Cross is supplying them with shoes and clothes.

“We have provided all these people with first aid. Many of our staff volunteers were on site once we were notified about the incident and many others went early this morning to the reception centre to set up tents to accommodate the refugees,” Hadjimichael told the press as he welcomed them at Kokkinotrimithia.

Generally speaking, these people are fine but the children need special care. “We are doing whatever it is humanly possible to help them,” he noted.

Director General of the Cyprus Red Cross Takis Neofytou said they are working in close cooperation with the civil defence and all the competent authorities, to ensure the refugees get all the help they need.

“We have talked to them and explained that all procedures, provided by international conventions, will be followed through. We told them they are in an EU country and European law will be applied and asked for their patience, saying we want them to cooperate with us to help them,” he added.