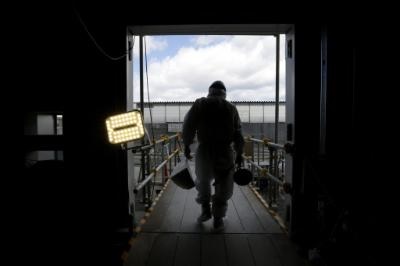 Regional groups have gathered in the UN-controlled buffer zone in Nicosia to call for a common front against nuclear power in the Mediterranean.

The bicommunal Cyprus Anti Nuclear Platform, in cooperation with environmental organisations in Turkey, the Greens in the European Parliament and the Green European Foundation, addressing a conference at the Home for Cooperation, urged Turkey to reconsider its decision to build a nuclear power plant in Akkuyu, a town on the Turkish coast of the Mediterranean, across Cyprus.

Rebecca Harms, Co-President of the Greens/EFA Group, addressing the meeting on Saturday, said she has been concerned by the nuclear project in Akkuyu since it started as it “has always been very doubtful whether it`s about energy or something else”, adding that she is even more convinced that “this project is more about the prestige of a government and a President in Turkey”.

She also said it has to do with the empire of power of Gazprom and its company Gazprom Rosatum which will construct the plant.

Harms said the nuclear risk in such a seismic region should not be added, creating “tremendous additional risk in this region of the Mediterranean”.

She urged Turkey to look at the example of Japan Fukushima. “All countries suffering from earthquake risks like Turkey should abstain from nuclear power,” she added.

Greece, Italy have no nuclear power for this reason and Turkey should follow in this line, she said.

George Perdikis, General Secretary of the Ecologists – Environmentalists Movement in Cyprus, said the event is a milestone in the common effort of Turks, Greeks and Cypriots and organisations against the construction of the Akkuyu power plant and other plants that Turkey is planning.

He said the “nuclear nightmare is rising in our region”, adding that Turkey is after strategic and energy advantages against other countries in the region.

A declaration, calling on Turkey to stop all action to build the power station in Akkuyu, was signed by the organisations from Cyprus, Greece and Turkey.

It said Turkey’s plans to establish nuclear power stations in the Eastern Mediterranean date back to 1970s. It has now moved to realise these plans by making a government level agreement with Russia in 2010. Not only does Turkey’s decision pose a risk to the future of the Mediterranean, but it also contravenes the Mediterranean Action Plan, established under the auspices of the United Nations Environment Programme (UNEP) with 16 Mediterranean countries and the European Union in 1975, and the Barcelona Agreement, formed in 1995 and expanded in 2002, where Turkey is a party.

“We, the inhabitants of the Mediterranean region, declare our opposition to the establishment of a nuclear power station in Akkuyu, Mersin for the sake of our safety and due to our responsibility to protect the living organisms and the ecosystem in the Mediterranean”, the declaration said.

It explained the main reasons they do not want ‘non-observable’ and ‘non-monitorable’ radioactivity in the Mediterranean include the opposition of scientists against the presence of different fault lines in the region, the water discharge that the Nuclear power station will obtain from the sea will increase the sea caloric temperature up to 33 degrees celcius, thus threatening the sea organisms and the endemic species living around the sea and with cumulative effect, it will gradually end the life at sea.

It also said the International Agreement signed between the governments of the Republic of Turkey and the Russian Federation does not specify where and how the nuclear waste will be stored, does not designate responsibility in the case of an accident, and does not indicate how and by who the accident will be managed.

The Nuclear Power station will be accountable to the Prime Minister’s office, the declaration said, and people who are not experts in their fields will gain power and responsibility, causing organisational problems. It recalled that the Tokyo Electric Power Company, which showed grave negligence in the Fukushima accident, had confessed that the reason of the accident was issues of authority and mandate.