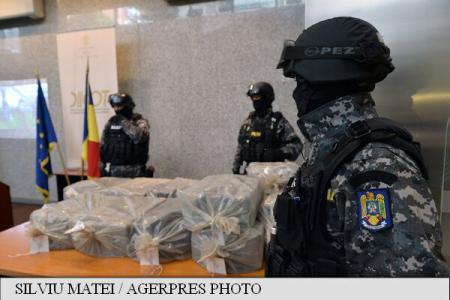 The prosecutors with the Directorate for the Investigation of Organized Crime and Terrorism (DIICOT) in Bucharest have displayed on Wednesday 333 kilograms of heroin found on Tuesday in a lorry that was attempting to leave the country through the Petea Customs Check Point of the northwestern Satu Mare County.

DIICOT chief-prosecutor Daniel Horodniceanu told a news conference that this was the biggest heroin capture on Romania’s territory after 1990; the previous record was set in 2005, when some 256 kg were seized.

The heroin is 62-65pct pure and has a gross market value of 8 million euro; it could have brought 40 million euros after dealing.

The drugs were wrapped in packages and transported in a lorry, masked in special metal sheet tanks, covered in lead, so they won’t be detected. The packages were soaked with paprika and pepper to confuse the narcotic detection dogs.

Horodniceanu added that a criminal group made of Romanian and Turks drug dealers was involved; 11 persons are heard in this case, with four (two Romanians and two Turk residents of Romania) already detained and brought to a court for arrest pending trial. More…