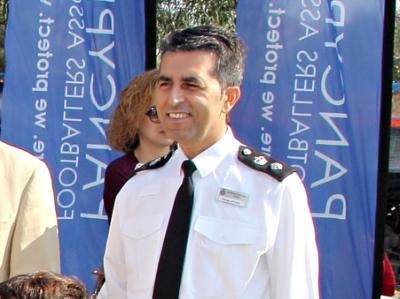 The SBA Police’s Acting Chief Superintendent George Kiteos has been awarded the Overseas Territories Police and Fire Service Medal by Her Majesty the Queen in the New Year’s Honours List, making him the first Cypriot to have ever received such an award.

Speaking to CNA, Kiteos said the medal and title, to be awarded at Buckingham Palace during a special ceremony, was an honour for himself and Cyprus in general.

`First of all, it is a great honour to have been given this award, and to be the first Cypriot to receive it is very humbling`, he said.

He added that he had received a call from President of the Republic of Cyprus Nicos Anastasiades to congratulate him.

Kiteos, currently the highest ranking Cypriot police officer working in the SBAs, was given the award after serving the force with distinction since joining up as an 18-year-old in 1985.

His work during the opening ceremony of Cyprus accepting the EU Presidency at Curium in 2012, where he took command of more than 200 SBA Police officers and had responsibility for 400 Cyprus Police officers, was highlighted as one of the reasons he was given the award.

His standing within the local community, where he is active as a police officer, in forging closer relationships between the police and the public, and his outstanding charity work ethic, were also cited as key contributing factors in him receiving the prestigious honour.