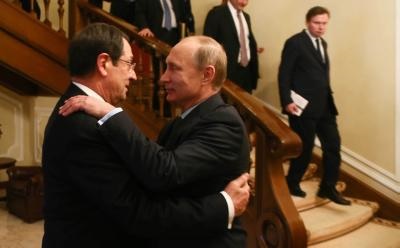 In his message President Putin says that the Russian-Cypriot relations, based on the long-standing traditions of friendship, cultural and spiritual closeness, “have been developing in a positive way” adding that this was fully confirmed by the outcomes of recent meetings the two leaders had in Moscow.

“I am sure that by joining our efforts we will further promote the mutually beneficial ties in different fields”, President Putin says.

In his message he also reaffirms that Russia will consistently continue to stand for a just, comprehensive, viable settlement of the Cyprus problem in the interests of all Cypriots “without any pressure from outside”.

“I wish you strong health and success and to all your compatriots welfare and prosperity”, the Russian President says.