Presidents of Cyprus and Russia to sign protocol on economic cooperation 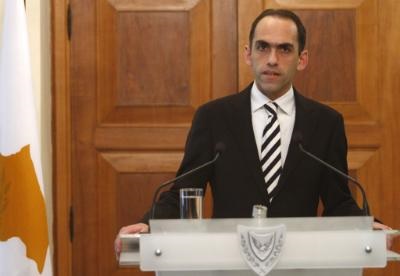 Cyprus and Russia initialled today the protocol of the 8th meeting of their Intergovernmental Committee for Economic Cooperation.

The protocol, which was initialled in Nicosia by Minister of Finance Haris Georgiades and Russian Deputy Minister for Economic Development Nicolay R. Podguzov, is to be signed by the Presidents of Russia and Cyprus during the Cypriot President`s official visit to Moscow on the 25th of February.

In statements after the meeting with the Russian delegation, Cypriot Minister of Finance Haris Georgiades said that the meeting was a productive one adding that it demonstrated that the historic ties between the two countries and their friendly relations create the necessary circumstances for more achievements in the field of bilateral cooperation.

Referring to President Nicos Anastasiades` visit to Moscow, the Finance Minister said it will contribute to a great extent to the enhancement of the cooperation between the two countries in many areas.

The protocol, he said, concerns the fields of commerce, energy, agriculture, tourism, education, science and culture.

The Minister referred to the prospects of a new cooperation in the fields of maritime commerce, telecommunications and technical military cooperation.

Referring to the economy of Cyprus, Georgiades said that it is on a course of stabilisation and described the enhancement of the cooperation with Russia as important for the efforts to boost the economy of the island. He also said that Nicosia looks forward to the normalisation of the EU – Russia relations.

In his statements, the Russian official said that the ties between the two countries are very good despite the difficulties in the relations between Russia and the EU.

Today`s meeting, he went on to note, will define the continuation of the cooperation between the two countries in the near future.