President to set up subcommittee for Cyprus problem 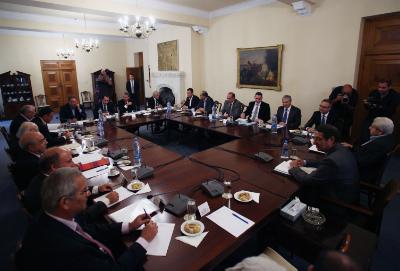 President of the Republic Nicos Anastasiades is considering to set up a subcommittee with the participation of the political parties which will assist his work for the achievement of a comprehensive solution of the Cyprus problem, Government Spokesman Nicos Christodoulides said today.

The Spokesman was speaking to journalists after the two-day meeting of the National Council, the top advisory body to the President as regards the Cyprus issue.

Christodoulides said that during the two -day conference of the National Council the parties had the opportunity to explain their concerns and their positions with regard to the strategy and tactics, aiming to bend the Turkish intransigence and to achieve, at the earliest possible, a solution to the Cyprus problem that corresponds to the expectations of the people of Cyprus, Greek Cypriots and Turkish Cypriots.

He added that during the meeting constructive suggestions were submitted, but there were also disagreements registered.

Christodoulides said that the President of the Republic recorded carefully the views and concerns that were expressed by the leaders of the parliamentary parties, reiterating his commitment to the achievement of a solution that will be based on the evolution of the Republic of Cyprus into a bi-zonal, bi-communal federation with political equality, as defined in the relevant resolutions of the Security Council, the High level Agreements, the Agreement of 8 July and the Joint Communique of 11 February.

“The President of the Republic, out of respect for the suggestions that were submitted, is oriented towards the creation of a subcommittee, with the participation of the parties, for the codification of the positions and the proposals that have been registered with the aim to assist his work for the achievement of a comprehensive solution to the Cyprus problem at the earliest possible,” he pointed out.

The Republic of Cyprus, an EU member state since 2004, has been divided since 1974 when Turkey invaded and occupied its northern third. UN-led talks to reunify the country under a federal roof have failed so far due to Turkey`s intransigent stance and a policy of a `two state` solution on the island.

Turkey, which is an EU candidate country, violates international law and human rights in Cyprus since the invasion in 1974. Numerous resolutions and decisions by international and European organisations calling on Ankara to withdraw its troops from Cyprus are not respected by Turkey.

In October 2014 President Anastasiades suspended his participation in the talks following a Navigational Telex or NAVTEX, issued by Turkey in October last year, as Turkish seismic research vessel “Barbaros” violated the Republic’s exclusive economic zone. Repeated calls for the withdrawal of “Barbaros” went unheeded by Ankara, which announced in January the NAVTEX`s extension until April 6, 2015.