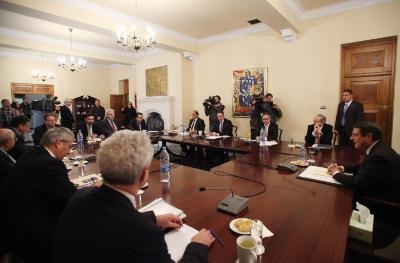 President Nicos Anastasiades will assess the state of play with regard to the Cyprus problem and the bill on foreclosures, a crucial requirement for the island`s €10 billion bailout.

According to reliable sources, President Anastasiades will meet Monday morning with the Ministers of Finance and Interior Harris Georgiades and Socratis Hasikos to discuss futures steps in the implementation of Cyprus’ economic adjustment programme after the House of Representatives suspended the implementation of a bill on foreclosures, a precondition for the sixth tranche of €436 million.

Following the suspension, approved after the European Stability Mechanism disbursed €350 million of the sixth tranche, Cyprus was in breach of the programme`s requirements, prompting the IMF to postpone a meeting of its Executive Board that would have decided to disburse its share amounting to €86 million. An IMF spokesperson noted that “critical requirements for the completion of the 5th program review are no longer met.”

Furthermore, European Commission sources have said that the next programme review scheduled to begin at the end of January may also be postponed.

President Anastasiades said that he intends to refer the bill back to the Parliament.

Today, the President will also meet with the leaders of the political parties to assess the latest developments in the Cyprus problem as Turkish seismographic vessel “Barbaros hayreddin Pasha”, that has carried out illegal seismic surveys in Cyprus’ EEZ remains docked at the port of Famagusta, in the Turkish-occupied northern part of Cyprus.

The issue of a Turkish NAVTEX from October 20 to December 30 reserving a large swathe inside Cyprus’ Exclusive Economic Zone (EEZ) for seismic surveys prompted President Anastasiades to suspend his participation in the UN-backed negotiations for a solution to the Cyprus problem.