President: There is now hope and prospect for a Cyprus solution 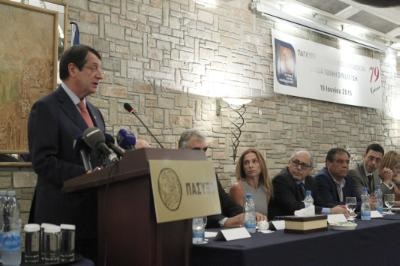 There is now hope and prospect for a Cyprus solution, President of the Republic Nicos Anastasiades said on Friday, addressing the General Assembly of the Pancyprian Association of Hoteliers, in Nicosia.

“These days there is hope and prospect for a peaceful and lasting solution, a solution that would meet the expectations of the Greek Cypriots, without of course neglecting those of the Turkish Cypriots”, he said.

He underlined that the continuation of the status quo is not to the benefit of anyone, “on the contrary”, he said, “it consolidates the fait accompli, the Turkish occupation”.

“We should finally seize this opportunity and create conditions that would allow us – by safeguarding human rights for all Cypriots – to give prospects and prosperity to our country”, he added.

President Anastasiades pointed out that “what we attempt to do, and there seems to be progress in that, is to realize that human rights must be safeguarded – and I am referring here to the current leadership of the Turkish Cypriot community”.

The President expressed his determination to work hard in the framework of the 2009 unanimous decisions of the National Council (top advisory body to the President on the Cyprus issue), the High Level Agreements of 1977 and 1979, the Papadopoulos – Talat agreement, and the joint communique of 11th of February 2014.

He pledged to work “tirelessly to overcome fear and distrust” and said that with the Turkish Cypriot leader Mustafa Akinci they will make every effort to create the prospects for mutual respect.

Concluding, President Anastasiades expressed hope that Turkey will contribute to the efforts for a Cyprus solution so that the island is free from foreign occupation troops and human rights are respected.

The Republic of Cyprus has been divided since 1974 when Turkey invaded and since then occupies 37% of this Mediterranean EU island`s territory. UN-led talks, aiming to reunite the island under a federal roof, resumed on May 15, this year.