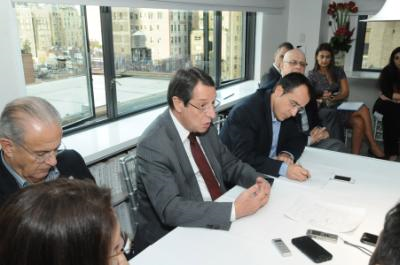 The lessons drawn by Europe due to the recent economic crisis in Cyprus was the focus of the President of the Republic Nicos Anastasiades` intervention at the Brookings Institution in the US.

Although the event was closed to the press, according to sources close to the President, Anastasiades analysed the measures and the policies of the government of Cyprus for the implementation of its economic adjustment program and referred to the important lessons for Cyprus, for other European countries, and for Europe as a Union.

The first lesson, he said, was that delays and indecisiveness involve a very high, economic and social cost.

“Many of our economic problems were caused by delays, postponement and inactiveness. By refusing to acknowledge the economic realities or by not taking measures in anticipation of a less painful solution we only cause the situation to deteriorate. The economic developments are rapid, in particular when credibility and confidence begin to erode and the downturn may take a geometrically negative spiral effect”, President Anastasiades said.

He stressed that the correcting this situation inevitably involves political cost, and requires courage and determination.

“But economic developments cannot be put on hold by politicians. As political leaders, our job is to take preventative or corrective measures in a timely manner and this should be the service we should offer to our countries”, he went on to say.

The second lesson, he noted, is that promoting structural reforms works, even in the short-term.

According to the President, it is universally accepted that the full benefits of structural reforms will are reaped in the long-term, and as far as Cyprus is concerned well after the term of the government.

He said that nevertheless they are also important in the short-term for one single reason, as they act as a catalyst for the restoration the country’s lost credibility; the restoration of confidence.

President Anastasiades pointed out that in Cyprus it was this loss of confidence that sparked a negative spiral of events; “with the banking sector losing deposits and capital; the government being cut off the markets; the investors being unwilling to invest; consumers unwilling to consume and entrepreneurs willing to fire”.

“To regain credibility and trust requires action and real reforms. It requires Commitment and determination. We did not just implement but we actually took ownership of a program of fiscal consolidation and structural reform and we won the uphill battle of restoring international confidence. Our quick reaction to the crisis and the frontloading of a reform strategy delivered”, he said.

A third lesson, he added, is that the perception that fiscal consolidation always leads to deeper recession and rising unemployment is false.

“We can be more productive by ensuring that fiscal consolidation and economic growth go in hand.
Economic recovery or growth is a structural issue and does not always require continuously increasing public expenditure”, he added.

The President also referred to the Cyprus problem and the efforts to reach a solution, which he said should be viable. He also talked about Cyprus` role in the region as a place of peace and security. Concluding his speech, he referred to the close cooperation between Cyprus and the US.

After the President`s intervention a discussion followed during which he replied to questions from the audience.

A dinner followed with the participation of the members of the Brookings Institution, members of financial organisation and US think – tanks.

The Republic of Cyprus, a full EU member state since May 2004, is divided by Turkish troops since the summer of 1974. Turkey still occupies 37% of Cyprus` territory. UN led talks are underway in order to reach a solution and reunify the island under a federal system.