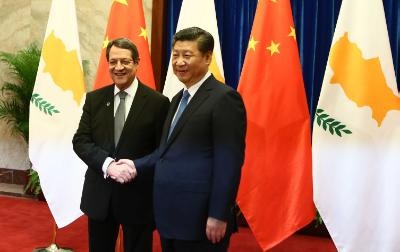 President of of the People`s Republic of China Xi Jinping has reiterated his country`s stance of principles as regards the Cyprus issue and expressed his support towards the efforts to reach a solution of the problem and reunify the island.

The Chinese President held a meeting today in China with President Anastasiades, who holds a series of meetings there and attended the Special Conference on Silk Road.

According to an official press release, the Cypriot President thanked his Chinese counterpart for the invitation and the warm welcome saying that his visit to China was among his priorities as he assumed office in 2013.

At the meeting, the Chinese President welcomed President Anastasiades` and his entourage`s presence at yesterday’s Conference and referred to the excellent relations of China with Cyprus and their mutual wish to further develop their ties in all sectors.

President Anastasiades, who is the only EU leader to attend yesterday’s Conference, extended an invitation to the Chinese President to visit Cyprus.

«We are ready to work towards further enhancing our existing excellent relations in all fields”, the President said.