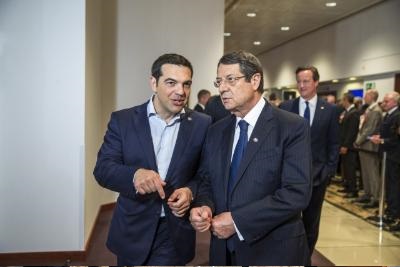 An agreement on Greece should take into consideration the fact that the Greek debt is not sustainable, President of the Republic, Nicos Anastasiades, said today, noting at the same time that the Cypriot government will be supportive in the effort of Greece to achieve a restructuring of the terms relating to the debt.

Invited to comment on developments in Greece, President Anastasiades said that “the first thing (that I want to point out) is the absolute respect for the decision of the Greek people, not only from us, but also from all Europeans and in particular from all the European governments”.

“The second thing that I ought to recognize is the positive approach of the Prime Minister that the predominance of the ‘no’ vote does not mean, in any way, the exit of Greece from the euro,” he added.

At the same time he underlined “the decisiveness with which the Greek Government is undertaking the initiatives in order to achieve an agreement that will meet the targets, which must also be the targets of Europe as well”.

The President indicated that the agreement should take into consideration the social repercussions and in particular the human crisis that Greece is facing, as well as the fact that growth that must be achieved through special resources.

“For both, what is required, in my view, at the present stage, is that the unsustainability of the Greek debt should be taken into consideration” he stressed.

Anastasiades also noted that the Cypriot government will be supportive in the effort of Greece to achieve a restructuring of the terms so that the debt can be sustainable.

Asked whether following the result of the referendum in Greece he has communicated with the Greek Prime Minister and/or other European leaders, President Anastasiades replied that he has “exchanged messages” through associates with Alexis Tsipras.

He said he had not contacted other leaders, recalling that the entire understanding of the previous week is that what is required is, first, respect for whatever verdict is rendered by the Greek people and, second, the immediate effort that must be made so that a program is achieved, at the earliest possible, within the framework that I mentioned before.