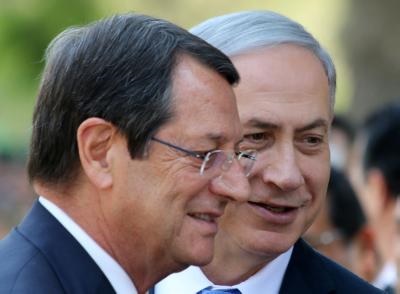 The discovery of vast reserves of hydrocarbons in the Eastern Mediterranean has the potential to transform the region, unleashing economic development and prosperity, and promoting peace and stability, Cyprus President Nicos Anastasiades said on Friday, adding that Cyprus stands ready to fully cooperate with its neighbors to promote these goals.

Receiving, during a formal ceremony at the Presidential Palace, the credentials of the Ambassador of the State of Israel to Cyprus, Yael Ravia-Zadok, Anastasiades noted that the bilateral relations of Cyprus and Israel in the energy sector “are well advanced and on the right track. In this sense, we are engaged in further promoting energy cooperation between our two countries in good faith and based on the principles of sovereignty, international law and friendly relations, being mindful of the fact that the legitimate rights of all parties should be respected”.

Presenting her credentials, Ambassador Ravia-Zadok said that Israel is Cyprus’ firm ally and “the bonds between the leadership of our countries, followed and inspired by the great affection between our peoples, will continue to flourish.” She noted that Israel hopes that the negotiations, now being conducted in Cyprus, will reach a just and viable solution, in line with relevant UN Security Council resolutions, the High Level Agreements and the 2014 Joint Declaration of the two leaders, for the benefit of the people of Cyprus and the region.

Anastasiades said that the two countries enjoy extensive cooperation in a series of fields from energy and strategy to tourism and culture. “Moreover, high-level political consultations are held frequently. My visit to Israel and the follow-up visit of Prime Minister Netanyahu here in Nicosia, later in July, reflect the special bond between our two countries. There are, of course, numerous other exchanges at different levels across the board and our officials consult frequently on a variety of issues,” he noted.

He said that “our common values and similar outlook underline our commitment to offer each other help and support, especially at a time when the neighbourhood we share faces multiple threats. Since 2011, our region has undergone tremendous change, characterized by volatility, instability and unpredictability.”

“In this context, the strategic cooperation between Cyprus and Israel in the Eastern Mediterranean acquires special significance. At a time when the Middle East is under threat from the forces of terrorism, extremism, and religious intolerance, Cyprus and Israel stand together as pillars of stability and cooperation,” he underlined.

As regards the ongoing UN-led negotiations on the Cyprus problem, Anastasiades said that to-date, the negotiations have proceeded smoothly, but there are still critical issues to be discussed and negotiated. He expressed hope that Turkey, which still occupies the northern part of Cyprus, will demonstrate genuine political will and grasp the opportunity offered by the current positive climate in Cyprus to abandon its intransigent stance and contribute in a positive way to the process.

Anastasiades reiterated his sincere willingness and determination “to work tirelessly to achieve a settlement based on a bicommunal, bizonal federation with political equality, as set out in the relevant Security Council Resolutions, the High Level Agreements and the Joint Declaration of February 2014, with a single international legal personality, a single sovereignty and a single citizenship, safeguarding the principles, upon which the European Union is founded and ensuring the peaceful co-existence and prosperity of all Cypriots.”

“We also reiterate our strong belief in the adoption of confidence building measures, including our proposal on Varosha, aiming at building trust, and good will between the two communities, thereby providing a much needed stimulus to the prospect of reaching a settlement,” he noted.

Ambassador Ravia-Zadok said that “the unbreakable bonds of friendship that historically and traditionally unite our two nations go a long way back in time,” and assured that she will do her utmost to upgrade the bilateral relations in every manner possible, strengthening the already existing bridges, paving new roads for increased cooperation in areas such as energy, tourism, culture, education, economic relations and business, agriculture, water and hi-tech, defense, and security.

“I believe that joint cooperation can benefit both countries, economically and strategically. Increasing the volume of bilateral trade and mutual investments can contribute to both economies, thus supporting the Cypriot impressive implementation of its responsible economic policy by the Government and the people of Cyprus. Building networks of cooperation between our peoples will provide the assurances for a lasting alliance between Israel and Cyprus,” she noted.

She said that Cyprus’ unique location in the basin of the East Mediterranean, as well as its respected political leadership, may serve as a fertile ground to establishing a network of regional cooperation, in which Israel and Cyprus may play a leading role. “Under the Cypriot leadership, we can create an enhanced regional cooperation on security, energy security, tourism and economic development, serving as an accelerator for stability in our region. Challenges of terror and Islamic extremism make this regional cooperation more relevant than ever before,” the Ambassador pointed out.

She said that both Israel and Cyprus share a vision of a lasting peace that will be freely enjoyed by all future generations to come and that “both our people have never lost the hope to achieve peace”.

UN-led negotiations between President Anastasiades and Turkish Cypriot leader Mustafa Akinci began in May 2015, with a view to reunite Cyprus, divided since the Turkish invasion of the island in 1974.
CNA/MK/ΜΜ/2015
ENDS, CYPRUS NEWS AGENCY