President : Cyprus can become a medical center in the area 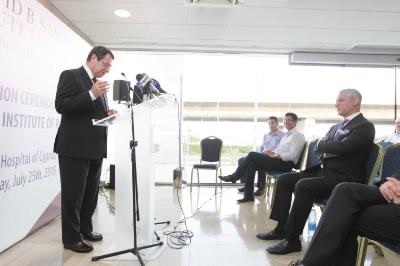 Cyprus can become a medical center in the region providing first class medical care to local residents as well as visitors, President Nicos Anastasiades has said, as he inaugurated the first Robotic Surgery Department in a private hospital in Limassol.

The President acknowledged that much remains to be done in state hospitals and expressed hope that the new Minister of Health, who takes office on Monday, will put an order where needed and proceed with the implementation of the General Plan of Health.

In his address, President Anastasiades welcomed the upgrading of private hospitals in Cyprus. It contributes significantly, he said, not only to avoiding costs when sending patients abroad, but most importantly it helps Cyprus become an important regional medical center, something that was missing.

“I believe this creates conditions for a promising future of the health sector which can benefit society at large and the country in general,” he added.

Furthermore, he said that the initiative of the private hospital to create a Department of Robotic Surgery is not only something that the government supports but encourages, in order to enrich the options a patient has.

The first robotic surgery was carried out on 22 July.