President calls on Turkey to demonstrate political will for a solution 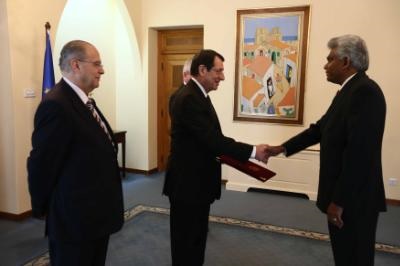 President of the Republic Nicos Anastasiades has called on the Turkish Cypriot leadership and in particular Turkey to demonstrate genuine political will and negotiate in good faith, so as to contribute constructively to the efforts to reach a settlement of the Cyprus problem as soon as possible.

President Anastasiades, who received today the credentials of new High Commissioner of Malaysia to Cyprus, stationed in Beirut, Bala Chandran Tharman, said the resumption of results-oriented negotiations, aiming at a comprehensive, viable and fair settlement of the Cyprus issue, remains his first priority.

He added that `what we need now is the implementation of measures that will restore confidence, and not measures that increase mistrust among the legal citizens of the island, through actions that violate international law`.

In this respect, he went on to say, `I call the Turkish Cypriot leadership and in particular Turkey to demonstrate genuine political will and negotiate in good faith, so as to contribute constructively to the efforts to reach a settlement as soon as possible, not only in theory and rhetoric, but through practical and substantial actions`.

Replying, the Malaysian diplomat said his country is supportive of all efforts to find a comprehensive settlement to the question of Cyprus, in accordance with the relevant UN Security Council resolutions adding `we encourage the parties directly involved to resume the negotiations as soon as possible for the lasting peace and prosperity of the people of the Republic of Cyprus`.

President Anastasiades also referred to the economic situation on the island, saying that two years after the Eurogroup decision on Cyprus and `as a result of the hard work of the government and the efforts of the ordinary citizens, I can state with certainty that we have turned the page; the Cypriot economy is now on the road to recovery`.

`Cyprus has made great progress in its reform program during these two years. The credit institutions have been restructured and recapitalized, foreign capital has been invested both in the Bank of Cyprus and the Hellenic Bank and public finances have been consolidated and important structural reforms, including a privatizations’ roadmap, have been initiated. These achievements helped Cyprus re-access international capital markets during 2014` he stressed.

He pointed out that the government is aware of the challenges ahead since unemployment is high and the private and public sectors are heavily indebted, while the banking sector remains vulnerable given the high percentage of non-performing loans and tight funding conditions.

`Among other initiatives, the government campaign to attract foreign investments and the reform of the foreclosure regime and the insolvency framework are intended to address these challenges` he pointed out, adding that `our emphasis is now turned towards the necessary structural reforms`.

President Anastasiades said that the commitment of his Government to implementing the Memorandum of Understanding agreed with the Troika is unequivocal.

`The way forward is not easy, but I have absolute confidence that the spirit of unity and the drive to succeed already demonstrated by the people of Cyprus, will prevail` he added.

Referring to bilateral relations, he said Cyprus is committed to further strengthening the friendly bilateral cooperation in all possible fields and said that on the international level, Cyprus and Malaysia enjoy valuable cooperation within the framework of ASEM, the Commonwealth and the UN.

On his part, the Malaysian diplomat said that both countries share similar values and take common approaches on many regional and international issues. `Despite our current strength, I believe that there is room for further expansion of this relationship through increased engagement in the various fields`, he said.

`I am happy to note that over the last decade, trade though small, has been growing at a rate of 10% per annum. And, in the last three years alone, total trade had increased dramatically at a rate of 63%. Nevertheless, I believe that there is ample room to further expand trade, especially in investment and tourism` he added.

Cyprus has been divided since 1974, when Turkish troops invaded and occupied its northern third. Peace talks were suspended in October last year as Turkish vessel Barbaros violated Cyprus` exclusive economic zone and Ankara issued a NAVTEX, which reserved part of Cyprus` EEZ.