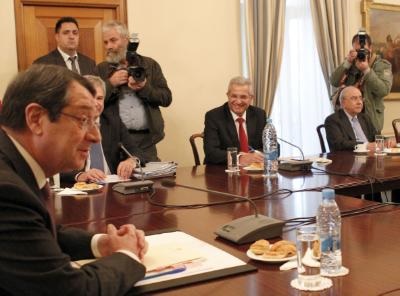 Cyprus President Nicos Anastasiades will preside a meeting Friday morning with the leaders of parliamentary parties to discuss the latest developments in the Cyprus issue.

The meeting is scheduled to take place at the presidential retreat in the Troodos mountains.

Government Spokesman Nicos Christodoulides told CNA that the only issue on the agenda will be the Cyprus problem and that President Anastasiades and party leaders will review and discuss the situation.

Cyprus has been divided since 1974 when Turkey invaded and occupied its northern third.

Turkey issued on October 3 a NAVTEX and reserved a large swathe inside Cyprus’ Exclusive Economic Zone (EEZ) for seismic surveys from October 20 to December 30.

President Nicos Anastasiades decided in October to suspend his participation in the UN-backed negotiations for a solution to the Cyprus problem, after Turkish seismic exploration vessel Barbaros entered Cyprus` EEZ, a few days after the illegal maritime order was issued by Turkey.