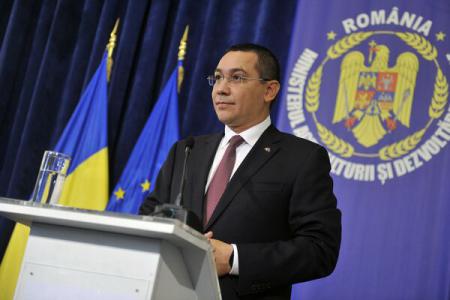 Romanian Prime Minister Victor Ponta said on Wednesday he is glad when he is criticized by Moscow for the fact he wants the Republic of Moldova to join the European Union.

‘I am glad when I am criticized by Moscow for the fact that I, alongside (Moldovan) Prime Minister Iurie Leanca want Moldova to be in the European Union by 2018-19. Maybe it is too ambitious a goal, but if one does not have ambitious goals, one does not attain them. I think that the reunion of Romania with Moldova inside the European Union, not otherwise, is a strategic objective for the pro-European government in Chisinau and for the government of Romania and for all those who see a pro-European future for the Republic of Moldova’, Ponta said at the beginning of the executive’s weekly meeting.

The Information and Press Department with the Russian Foreign Ministry said in comments posted on its official website on Tuesday that Moscow is concerned by the statements of the Romanian Prime Minister Victor Ponta regarding the future of the Republic of Moldova made during a meeting with activists of the Social Democratic Party in Alba Iulia (central Romania).

The open appeal of the candidate for presidency of Romania to ‘perform the second great merger by 2018’ clearly confirms that certain political circles in Bucharest still have annexationist plans with regard to their neighbour, a sovereign and neutral country, the Russian ministry said.