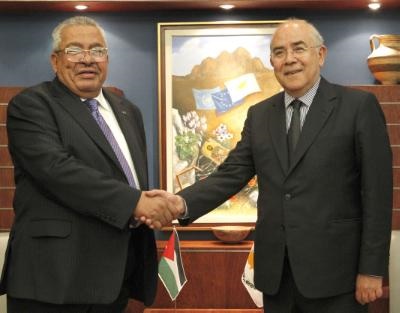 Bilateral relations, inter parliamentary relations, the Cyprus and the Middle East problems as well as energy issues, were discussed at a meeting here in Nicosia between Cyprus House President Yiannakis Omirou and President of the Jordanian Senate Abdur-Rau’f Rawabdeh, in the framework of Rawabdeh’s official visit to Cyprus.

Omirou stated that they discussed about the threat of the Islamic State noting that they ascertained that Cyprus and Jordan constitute factors of stability, peace and cooperation in the region.

On the Middle East problem, Omirou said that he reiterated Cyprus` support on the establishment of two states, that will peacefully coexist on the basis of 1967 borders.

Omirou thanked the President of the Jordanian Senate for his country`s support towards a solution in Cyprus based on the UN Security Council`s resolutions, that will give an end to Turkish occupation and that will reunite the country, the people, the institutions and the economy.

On energy issues, Omirou said that Jordan is interested on importing natural gas from the Republic of Cyprus` reserves and on the other hand, Cyprus is willing to supply Jordan with natural gas as soon as the infrastructures are ready.

In his statements, Rawabdeh thanked the Parliament and the people of the Cyprus for the lasting positions of support towards the Arab issues and especially on the Middle East problem, and added that Palestinians suffer and the majority of them live expelled.

“For that reason we express our appreciation to all that support the safeguarding of the inalienable rights of the Palestinian people and the establishment of their own state”, he added.

Rawabden also stated that Cyprus and Jordan are constant factors of peace and stability in the region and “we achieved that by promoting changes in the system of governance the Constitution and the Legislation.

“We will work to continuously improve and strengthen the relations between the two parliaments”, and between the two countries in the fields of energy, economy and politics” he said.

Finally, Rawabden expressed the wish that the negotiations between the two communities in Cyprus that will resume soon will bring a solution to the problem that will ensure the sovereignty and unity of the island.

Cyprus has been divided since the Turkish invasion in 1974. Despite repeated calls of international and European organisations Turkey still occupies 37% of Cyprus’ territory.

UN-led peace talks are expected to resume in May, with the top UN Cyprus envoy arriving on the island next week to prepare the ground for the resumption of the talks.