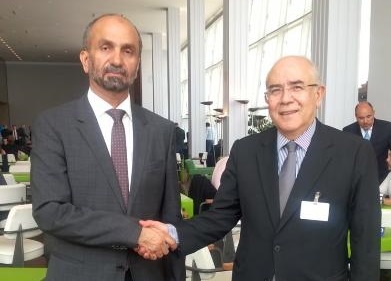 Cyprus talks, Middle East peace process, ISIS and Europe`s refugee crisis were on the agenda of a meeting House President Yiannakis Omirou had on Wednesday with the President of the Arab Parliament Ahmed Mohamed Al Jarwan in New York, on the sidelines of the 4th World Conference of Speakers of Parliament which was concluded in NYC.

The participants adopted a declaration entitled “Placing democracy at the service of peace and sustainable development: Building the world the people want”.

According to a press release issued by Cyprus House, Omirou and Al Jarwan agreed on the need for the Cyprus problem and Mideast conflict to be resolved on the basis of UN Security Council resolutions and the principles of international law. Omirou briefed the President of the Arab Parliament about the ongoing peace talks to solve the Cyprus problem and thanked him for the support of the Arab world in the struggles of the Cypriot people to end the occupation.

The two Presidents also discussed the humanitarian crisis in the Middle East and the huge numbers of refugees fleeing to Europe and agreed on the need both the international community and the EU to take actions to terminate this crisis. With regards to “Islamic state”, they both agreed that its actions constitute a threat to peace, security and stability in the region.

Omirou and Al Jarwan also agreed to establish bilateral relations between the House of Representatives and the Arab Parliament.

UN-backed talks between the leaders of the two communities in Cyprus-the Greek Cypriot community and the Turkish Cypriot community-resumed in May this year, with a view to reunite Cyprus, divided since the 1974 Turkish invasion, under a federal roof.